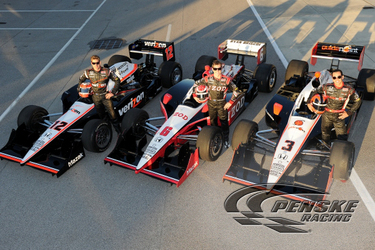 LEEDS, Ala. (March 1, 2011) – Team Penske took to the track at Barber Motorsports Park for the first laps of the 2011 IZOD INDYCAR Series season on Tuesday. Drivers Helio Castroneves, Ryan Briscoe and Will Power all spent considerable time on the track getting re-acquainted with their cars, engineers and crews.

The day was smooth and productive for all three crews and drivers. There were no official timed laps, but all of the teams were pleased with the work they accomplished.

“It felt great to be back in the car,” said Helio Castroneves. “Today was mostly about getting back in to a groove and finding our rhythm. We spent the first part of the day just getting comfortable and then in the afternoon we were actually able to test a few things out on the track. Overall, it was a very productive day and I certainly look forward to coming back for the open test in a couple of weeks.”

“I was happy to be back in an IndyCar, it has been a long time away from the car for all of us,” said Ryan Briscoe. “We spent the morning just kind of knocking the rust off. This afternoon we were able to get into our test program and it was a productive afternoon. We are already looking ahead to the open test and we are excited to get the season underway.”

“We had a great day on track, it felt like I had not been out the car at all and was almost surprised at how I immediately felt comfortable,” said Will Power. “I can’t wait to come back for the open test and then get down to business in what is sure to be one of the most competitive seasons in IndyCar history.”

Team Penske will next take the track at the open test March 14 -15 at Barber Motorsports Park.