Team Penske excited to be back in Toronto 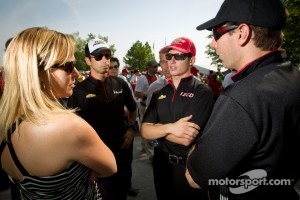 Take It Outside: The Honda Indy Toronto will be the first time in 2012 that the push to pass system will be available to the IZOD IndyCar Series drivers as it will be utilized at the remainder of the road/street courses this season. INDYCAR will reduce the baseline boost level to 150 kPa, with an increase up to 160 kPa while the boost is engaged. The length of the boost, recharge time, number of boosts and possible set delays are still to be determined.

Journey Through the Past: Team Penske drivers have seen plenty of success in the previous races on the Streets of Toronto. Will Power has followed up his front row qualifying efforts in each of his last three starts (including winning the pole in 2011) in Toronto with a race victory in 2010 and a podium finish in 2009. Power also scored a win in the 2007 Toronto Champ Car World Series race before joining Team Penske. Teammate Ryan Briscoe recorded a second-place finish in 2009 and a top-10 result in last year’s race while Castroneves added a pole in 2000 and another top-10 finish to Team Penske’s totals.

Perfect: Team Penske continues its season-long hold on the top spot of the IZOD IndyCar Series Championship as Power leads the field with 286 points. He is joined in the top 10 by teammates Castroneves (fourth) and Briscoe (ninth). Castroneves led the series standings after the first two rounds of racing this season while Power took command after Round 3 in Long Beach and has led ever since.

Working Man: Power, who leads the Mario Andretti Road Course Championship with 212 points, has been nothing short of dominant in the five road/street course races of 2012. The Australian driver has an average qualifying position of third with two poles and two additional second-place qualifications. Race day has been just as rewarding as Power has three victories (Barber, Long Beach, Sao Paulo) and an average finishing position of 2.8. Power is also two laps shy of surpassing 1,500 laps led in his career.

Broken Wing: Castroneves hopes to reverse his previous misfortunes on the Streets of Toronto this weekend. In his seven career starts at the venue he has failed to finish five times, with the 2009 and 2010 race efforts ending due to contact. His pole-winning effort in 2000, his 27 career laps led at Toronto and an Indy Lights win at the circuit in 1997 show that he is capable of being successful at the venue.

Never Surrender: With his previous successes on the next four upcoming tracks on the schedule, Briscoe will look to begin his surge up the championship standings. In 17 combined starts at Toronto, Edmonton, Mid-Ohio and Sonoma, Briscoe has one race victory, three pole positions, six podium finishes, eight top-five results and an average finishing position of 6.3.

Chevy Showcase: Castroneves’ sixth-place performance last race at Iowa helped solidify Chevrolet’s dominating performance as six of the top eight finishers at Iowa were powered by Chevys. Paced by the performance of Team Penske’s drivers, Chevrolet has earned six wins in 2012 and at least one podium finish in eight of nine races this season.