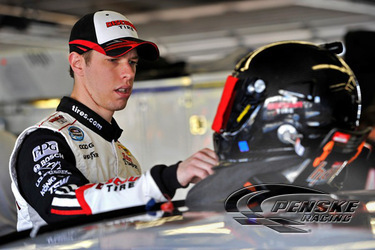 No. 22 America’s Tire Dodge Challenger News and Notes
• The No. 22 America’s Tire Dodge Challenger in 2011… After four events, Brad Keselowski and the reigning champion No. 22 America’s Tire Dodge Challenger team sit 17th in the 2011 NASCAR Nationwide Series (NNS) owner point standings.
• This Week’s Challenger… The Penske Racing America’s Tire Dodge Challenger team will use chassis PRS-214 during Saturday’s Royal Purple 300 at the two-mile Auto Club Speedway (ACS) oval. This is a brand-new chassis to the No. 22 fleet.
• 3, 2…1?… Since moving to Penske Racing in 2009, Keselowski has not finished outside the top-three in both of his NNS races at ACS. The Rochester Hills, Mich. native finished third in the 2010 spring race and second in the fall event. If the pattern holds true, Keselowski will be looking for the first victory of his career at ACS.
• New Car Smell… Penske Racing and the No. 22 Dodge team proved to be the class of the field in the four NNS races where the new Dodge Challenger was used in 2010. With two wins, four top-five finishes and one pole it was clear that the new car suited Keselowski and the team. With full implementation of the Challenger for 2011, Keselowski has plenty of confidence that he can improve upon the banner year he enjoyed last season.
• Keselowski Speedway Stats… In 83 speedway starts in the Nationwide Series, Keselowski has accumulated five wins, 36 top-five finishes, 50 top-10 results and four pole awards. In addition, he has led the field for 970 laps at tracks between one and two miles in length.
• See Brad at Speedzone… Keselowski will make an appearance at the Speedzone located at 17871 Castleton Street in City of Industry, Calif., on Friday, March 25 at 6:00 pm PT.

Brad Keselowski on racing this weekend at Auto Club Speedway
“Auto Club Speedway was a really good track for us last year in the Nationwide Series. To come out of there with a second- and third-place finish in the two races was very critical to our run to the championship. I’d never considered it to be one of my better tracks, but now I’m confident we can go there and win the race. It’s really all about momentum at Fontana. With the carburetor spacer that we run on these Nationwide cars, you want to be able to roll the center of the turns quickly so that you can carry momentum off the corner and down the long straightaways. If we can do that, I feel good about our chances with the No. 22 America’s Tire Dodge Challenger.”

Crew chief Todd Gordon on Auto Club Speedway
“Fontana is a track that is very aero-sensitive. You need to keep the car ‘clean’ if you want to have a chance to win. We know that we have a driver that will give us everything he has and we’re going out there with one thing on our mind – winning the race. We haven’t started the season like we wanted to and a lot of that has just been bad luck. There is one thing that can cure all of that and that is to go to Victory Lane.”