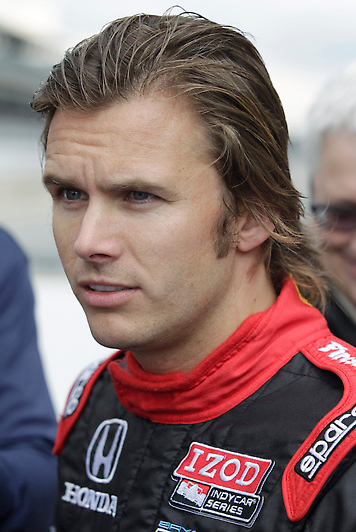 The two-time Indianapolis 500 winner died Sunday, October 16th, 2011 after being involved in a 15-car pileup on Lap 13. He was 33. Three other drivers are taken to a hospital for evaluation.

Veteran driver Dan Wheldon, who won the Indianapolis 500 for the second time this year, died from injuries suffered Sunday when his car was entangled in a horrific 15-car wreck early in the IndyCar series’ season-ending race at Las Vegas Motor Speedway. The Englishman was 33.

As the 34-car field moved through the first turn of Lap 11 on the 1.5-mile oval track at speeds of more than 200 mph, Wheldon was running 25th when cars began spinning in front of him.

Simultaneously, the car driven by championship contender, Australian IndyCar racer, Will Power also went airborne, others briefly caught fire as they crashed and debris was sprayed in all directions.

Power, after suffering a back injury at Las Vegas, Team Penske’s Will Power has been ruled out of this weekend’s Armor All Gold Coast 600.

Power initially walked free from his Penske Racing machine after the 15 car pileup that claimed the life of Dan Wheldon before later being taken to the University Medical Centre in Las Vegas complaining of lower back pain.

“On behalf of everyone at Ford Performance Racing I would like to pass on our heartfelt condolences to the family and friends of Dan Wheldon,” said FPR Team Principal Tim Edwards. “Our thoughts are also with Will Power at this tough time and we are just thankful he has escaped without any serious injury. I’d also like to thank Richard Lyons for stepping in at such short notice in place of Will. I have known him since my Formula 1 days and he has always impressed me so I am sure he will adapt quickly to our car and the Surfers Paradise track.”

Penske Automotive Group sincerely passes condolences to the family and friends of Dan Wheldon, he is in our thoughts and prayers.