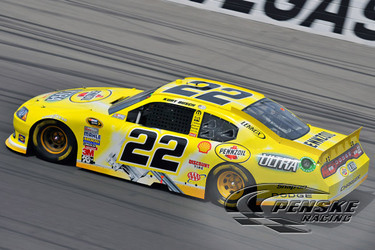 LAS VEGAS (March 6, 2011) – Kurt Busch certainly enjoyed his hometown drive in today’s Kobalt Tools 400 here at Las Vegas Motor Speedway, as he posted a ninth-place finish and left “Sin City” with a share of the NASCAR Sprint Cup points lead.  The Pennzoil Ultra Dodge driver’s third top-10 finish in the first three races of the 2011 season has him up front in the points for the first time since after the April 2009 race at Talladega, Ala.

“We gave it all we had,” said Busch, who entered today’s race with a 5.2 average start and a 21.9 average finish at LVMS.  “Steve (Addington, crew chief) made a great call to put us up front early and we were running and just biding our time.  On a restart, I got too racy.  I wanted the lead and get the bonus point and you can’t do that.  You have to race your race, let the race come to you.  I was a little loose, had some rear brake in it, (Juan Pablo) Montoya was close and I spun it around.  The Pennzoil Ultra Dodge Charger had a great run today.  I appreciate my crew for giving me a great car.  We’re right up were we need to be in points and really excited about today’s finish.

“We wanted to win this thing for sure,” said Busch, who cut his teeth on the adjoining “Bullring” three-eighths-mile track.  “I came up just a little bit short in my hometown.  I think I may have pushed a bit too hard early driving the car as hard as I did.  After I got loose in Turn 3 and spun the car, I just settled into the race and tried to start picking off as many spots as I could.  I’m not sure we had the winning car, but we were good enough to be top 10 and get as many points as I could.  Man, once you get stuck back in the pack here, everybody is running the same speed and it’s just really hard to gain spots.  The only way that you can do so is on pit road and have the confidence that your guys are going to do their job (in the pits)  This place is just fast and you’re on the edge every lap of the race.”

Busch started today’s race from the 22nd position and found that track position was a must from the drop of the green flag.  After Busch was describing the track conditions as, “like racing on egg shells out here,” Addington took heed and kept him out on the track during the first two early cautions of the race.

By the third restart of today’s 267-lap battle, Busch was up to second.  The running “off-sync” in the pitting sequence panned out well for the “Double-Deuce” team until he took a wild spin in Turn 4 on Lap 102 to bring out the fourth caution period of the race.  Fortunately, Busch kept his Dodge Charger off the wall.  Busch took responsibility for his spin even though the video showed he may have been pinched down by another car.  But, by the time the field went back to green, Busch was running in the 22nd position.

With Addington calling the shots atop the pit box, Busch and crew were able to grab a position at every opportunity and climb their way back up into the top 10 before the laps ran out.  The excellent calculating by Addington and team engineer Dave Winston kept Busch out an extra circuit on Lap 242 before hitting pit road a final time.  That allowed him to pick up an additional point for leading a lap in today’s race and was key in seeing Busch now tied for the points lead.

“I’m really proud of this race team considering how we started the weekend,” Addington offered.  “We made big changes from the time that we unloaded up to the race.  We really didn’t have to make big changes during the race; just maybe change the track bar a little bit and some wedge, which was about it.  I just want to thank everyone’s effort here at the race track.  They busted their tails to give us a great race car and it showed this afternoon.”

Today’s finish was Busch’s only third career top-10 finish in 11 career Cup races on his home track.  It matched his second-best finish that he recorded here in 2004 and was bettered by only his third-place finish (only top-five finish) here in 2005.  His best finish before today driving for Penske Racing was his 16th in the 2006 race.

Carl Edwards was able to claim the win here this afternoon after a dominant Tony Stewart bounced back from a pit road penalty to finish second.  Stewart was forced to start from the rear on a Lap 157 restart and exercised two-tire strategy on the next pit stop to get him back up running with the leaders.   But at the finish, it was Edwards taking the checkered flag by 1.246 seconds over Stewart.  Juan Pablo Montoya finished third, with Marcos Ambrose fourth and Ryan Newman fifth.  Martin Truex Jr., Denny Hamlin, Dale Earnhardt Jr., Busch and Brian Vickers rounded out today’s top-10 finishers.

After three races, Busch and Stewart are atop the point standings with 113 points each.  Edwards and Montoya are tied for third with 106 each, with Newman fifth (103 points).  Paul Menard is sixth (96), with Truex and Hamlin tied with 95 points, A.J. Allmendinger ninth with 94 points and Earnhardt 10th with 91 points.

Penske Racing teammate Brad Keselowski finished 26th here this afternoon and is currently 23rd in the standings with 63 points.

While the NASCAR Sprint Cup tour takes a much-deserved weekend off next week, Busch will be attempting to make the field for the GatorNationals NHRA race in Gainesville, Fla.  Busch got his feet wet in a lower division of drag racing last year before moving up to the “real thing” this season.  He is set to test one final time on Tuesday at Bradenton (Fla.) Motorsports Park before heading up the road to Gainesville.  Busch will be out to snare one of the 16 qualifying spots in the Pro Stock class.  He will have four qualifying passes to make in an effort to break into the field.

The NASCAR Sprint Cup tour is back in action two weeks from today as the circuit returns to Bristol Motor Speedway, Busch’s self-proclaimed “most-favorite race track of them all.”  The Jeff Byrd 500 presented by Food City is set to get the green flag on Sunday, March 20 at 1:00 p.m. ET and will feature live flag-to-flag coverage by FOX-TV and PRN Radio.