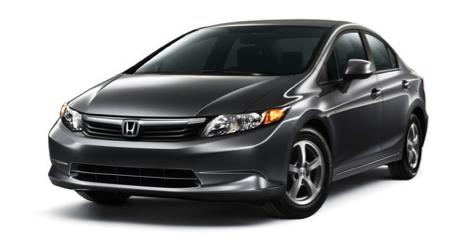 The 2012 Honda Civic Natural Gas will start at $26,155, with an additional $750 destination fee.  The Civic Natural Gas, which is the only natural gas-burning passenger vehicle that will be produced in the United States, has somehow stayed under the radar.

As a fuel alternative in general, natural gas doesn’t get much press.  However, natural gas costs about 30 percent less than gasoline, and has lower smog-former emissions.  Possibly the reason that the natural gas alternative doesn’t get much press is that the Honda Civic GX is only currently offered in four states.   The Civic Natural Gas – which is the new name for the Civic GX – will be offered in an additional 38 states when it is released on October 18.

Honda is the only major car manufacturer in the US that has a natural gas car.  With all the benefits natural gas has to offer, though, maybe we’ll start to see more it more frequently.  Natural gas is abundant, domestically produced, and costs less than regular gasoline.  Honda is pushing the Civic Natural Gas in response to a growing interest in the US in fuel-efficient alternatives to regular gasoline.

Drivers can refuel in their own homes by tapping into their gas line, or use a natural gas refueling station.  To help you locate these less-common stations, the Civic Natural Gas comes with the Honda Satellite Navigation System, which includes a database of Compressed Natural Gas stations.

The Civic Natural Gas will qualify for state-issued decals that allow single occupant vehicles to drive in the HOV lanes in some states, giving it an added value.

Updates on the Civic Natural Gas include new styling, enhanced performance, and increased fuel economy.  Drivers can expect 27 mpg in the city, 38 on the highway, and 31 combined.  Under the hood is a 1.8L four-cylinder engine with 5-speed automatic transmission.