After earning his first NASCAR Sprint Cup Series championship in the Penske Racing Dodge, Brad Keselowski was touring the Charlotte Motor Speedway 1.5 mile oval behind the wheel of the 2013 Ford Fusion.

Roger Penske made the switch at the end of the 2012 season. The champion was in the No. 2 Miller Lite Fusion this morning. “It’s hard to get a great read on the whole manufacturer change because, obviously, it’s a different car, but I think all the signs are there that we have the potential to be just as strong, if not stronger, than we were last year, which is very, very encouraging,” said Keselowski during the break.

The choice to attend the NASCAR two-day open test was up to the teams. Penske took advantage of the opportunity for both Keselowski and new driver Joey Logano. It is not only their first opportunity to run the Ford brand, but mainly testing the 2013 “Gen 6” version Fusion.

Keselowski added before the afternoon session, “It’s been a lot of fun having the first day today working with Joey, which I think has been probably more of an adjusting process than the actual car itself, and a good adjusting process. I’m curious to see over time how we can work together and push each other to be the best we can be, so I’ve had a lot of fun with that so far. We’ve got a lot of work to do. We’re only a half-a-day into two really important days, not only for Penske Racing but for the sport itself and, hopefully, we can continue to show progress.” 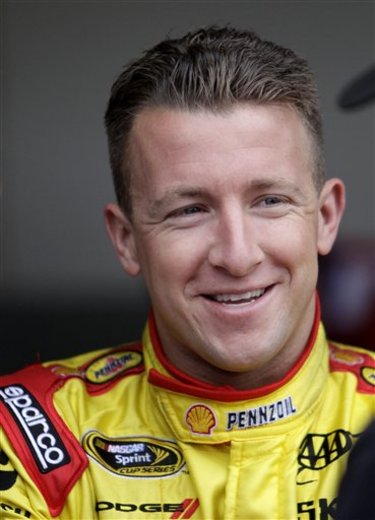 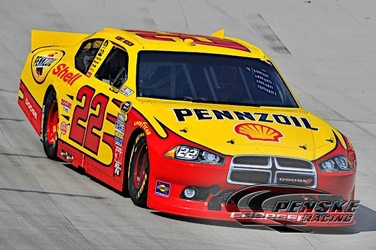 MARTINSVILLE, Va. (March 29, 2011) – Shell-Pennzoil Dodge driver Kurt Busch returns to Martinsville Speedway for this weekend’s Goody’s Fast Relief 500 with a positive attitude about Sunday’s bullring battle. The 2004 NASCAR Sprint Cup Champion has never tried to hide the fact that the circuit’s smallest track continues to present one of his biggest challenges.

“We’re coming back into Martinsville with a lot of confidence and a really positive attitude about racing there this weekend,” said Busch, who finished 17th at Fontana, Calif., on Sunday and is now third in the standings, trailing leader Carl Edwards by 10 points. “I’ll be the first to admit that the Martinsville races have always been so challenging to me and that goes all the way back through my career. But ever since Steve Addington came aboard as our crew chief at the beginning of last season, things have really begun to turn for the better.

“Steve deserves so much credit for rallying the troops every week and having our team’s confidence level up for all of these races,” Busch said of the veteran crew chief who will serve as his team leader for the 42nd race this weekend at Martinsville. ” I told him when he first joined the team that Martinsville was a weak track for me personally and he vowed back then that we’d work hard together in changing that. I think we’ve already made so much progress, but it’s a case of the numbers just not showing that.

“I guess he could see that if there was an Achilles’ heel in the mix of tracks for me, it was this track. He’s been really helpful in our positive attitude adjustment during the two races we’ve been together racing there so far. He has been able to bring the best cars I’ve driven at Martinsville and has our team really prepared for those races. We’re thinking the third time’s the charm and we’ll be able to come out of there with the best finish we’ve had there in years.”

In 21 career Cup races on the picturesque .526-mile paper-clip-shaped track, Busch has recorded one win, two top-five finishes and four top-10s. He has been running at the finish in 20 of the races and has a 97 percent lap completion average (10,211 of 10,519 laps) and finished on the lead lap in nine races. He has a career average start of 19.5 and career average finish of 21.3 at Martinsville.

“The biggest thing I’ve tried to stress to Kurt about racing at Martinsville is to keep his cool, stay focused and hang in there and keep plugging away,” said Addington, who has as much experience on the bullrings of the Southeast as anyone in the business. “It’s a 500-lap race and you have to be running at the finish to have a shot at the win or a solid finish up front. It’s a place that puts a premium on patience like no other track we race on.

“We tested down at Gresham last week just like we did before heading to Martinsville last year,” Addington said of his team’s March 22 testing on the half-mile Gresham Motorsports Park located near Jefferson, Ga. “We did that to make sure our car is ready to go when we unload there at Martinsville on Friday. We need to maximize all the track time they give us in getting prepared for Sunday’s race. We’re confident that will be the case and we can come out of there with a really solid performance and the good finish to go with it.”

When Busch discussed his 10 years of competing on the tough and demanding Martinsville track, it’s evident that Addington has already had a major influence in just the one season they have worked together.

“We’ve run very well there through the years, but you wouldn’t know that by just looking at the statistics,” said Busch. “The biggest thing is that it’s been seldom that we’ve been able to put together a whole race at Martinsville. We’d start out strong and not be able to get the good finishes we needed. Many times we’ve been strong enough to win a 400-lap race there, but the problem is that Martinsville races are 500-lappers, not 400.

“Our races at Martinsville last year were perfect examples of what I am talking about,” said Busch. “We had some of the strongest cars we’ve ever had there and didn’t get the solid finishes we should have. We had a loose wheel that bit us in the first race and some loose lug nuts that were the big culprit there last fall.

“We’re bringing in a brand new Shell-Pennzoil “Double-Deuce” Dodge Charger this weekend and feel like it will be fully capable of getting the job done,” Busch said of the new “PRS-741” chassis. “We were able to shake it down at Gresham last week and look to be really ready to rock and roll with it at Martinsville on Friday.

“We’re looking to hunker down and get all we can out of Sunday’s battle,” said Busch. “I know Steve will be on the radio preaching patience and I’ll do the best I can during the grind. I know what the drill is there. We need to survive the first 400 laps and be in a position to really get after it during those final 100 laps. That’s our game plan and if we execute like I think we can, we’ll be in good shape there late Sunday afternoon.”

This weekend’s Sprint Cup schedule at Martinsville Speedway gets under way with Friday’s opening practice from 12:30 until 2:00 p.m. The final practice is set for Friday from 3:30 p.m. till 5:00 p.m. Coors Light Pole Award qualifying to establish the starting grid for Sunday’s 500-lap battle is set for Saturday at 12:10 p.m. local (live on SPEED-TV). Sunday’s Goody’s Fast Relief 500 (500 laps, 263 miles) has a scheduled 1:00 p.m. EDT starting time. FOX-TV and MRN Radio will provide live coverage of all the action.