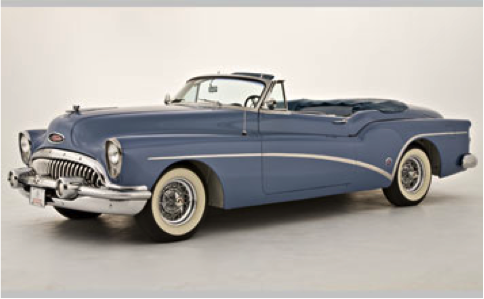 Today we’re taking a moment to highlight a Buick classic: the Skylark.   Immortalized in the film My Cousin Vinny, the Buick Skylark was first introduced to commemorate Buick’s 50th anniversary in 1953.  Over the years, the Skylark has appeared in a number of different forms; for this post, we’ll cover it’s first few runs in the 50’s and 60’s.

Initially, the Buick Skylark was introduced as a limited-production vehicle that was part of the Roadmaster line.  General Motors also produced two other specialty convertibles, the Oldsmobile Fiesta and Cadillac Eldorado.  Out of all three, the Skylark was the most successful, as Buick produced 1,690 units with a list price of just over $5,000.  All models were convertibles based on the two-door Roadmaster.  One unique feature of the Skylark was its V8 power and 12-volt electrical system, both firsts for Buick.  In the following year, 1954, the Skylark was not as popular, so Buick stopped production.

Almost a decade later, Buick reintroduced the Buick Special Skylark, which used the same chassis as the Pontiac Tempest and Oldsmobile F-85.  The Skylark still was not its own model, and was based on the Buick Special two-door sedan and had a 3.5L V-8 engine and a 4-barrel carburetor capable of producing 185 hp.

In 1962, it finally became its own model: the Buick Skylark.  Two styles were available: a two-door convertible coupe and a two-door hardtop. Over the years, as the Skylark evolved, it developed higher standards than the Special on which it was based.  For example, it included all-vinyl bucket seats in the convertible, and cloth-and-vinyl seats in the sedan.

The Skylark in Pop Culture

The Buick Skylark has been used in a number of movies.  In the movie My Cousin Vinny, a 1964 Buick Skylark becomes a major plot point in a court case against two New Yorkers accused of murder.  One of the defendants drove a metallic mint green Buick Skylark, which witnesses had confused with a Pontiac Tempest.  Other famous movies that include a Buick Skylark are The Goodbye Girl, Crossroads, and Vanilla Sky.