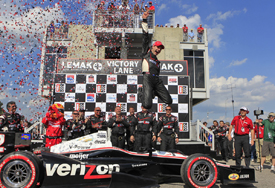 Will Power saw off a late challenge from Scott Dixon to take a superb win in Sunday’s IndyCar race at Barber Motorsports Park.

The Penske driver started from ninth on the grid, but a combination of aggressive strategy and a bit of misfortune on Dixon’s part helped the Australian to take the lead through the final cycle of pitstops.

Dixon (Ganassi) launched a final attack on the restart, and the lead duo quickly dropped the rest of the pack. The Kiwi was able to keep Power close initially before the Australian finally managed to open a gap. The final margin was 3.3 seconds.

Until just before the final round of stops, Dixon had the advantage. But after losing time behind HVM’s Simona de Silvestro, he suffered a slow pitstop, which was compounded by having to then wait for EJ Viso’s KV car to get out of the way before he could be released back into the pitlane. The time lost was enough for Power to take the lead, and after Dixon’s pursuit was halted by fading tyres, the result was sealed.

St Petersburg winner Helio Castroneves was third for Penske, although he had to see off a determined charge from Ganassi’s Graham Rahal to secure the place.

Despite Barber’s processional reputation, the race was peppered with overtaking from the beginning. The combination of passing and differing strategies made for constant position changes, with one of the main beneficiaries being Dario Franchitti (Ganassi), who managed to cross the line in 10th place after starting 18th.

The reigning champion spent the final phase of the race in combat with Dragon Racing’s Sebastien Bourdais, who delivered the Lotus engine’s first top 10 finish when he crossed the line in ninth, and Marco Andretti (Andretti Autosport), who was classified 11th after spending more or less the entire afternoon either attacking or defending.

Rubens Barrichello (KV) took a step forward in his adaptation to IndyCar by finishing eighth, capping his afternoon with a passing move on Andretti in the final laps.