Can you get better if you continue to get smaller?

Last season, Dodge proved it could race competitively in Sprint Cup with one three-car team at Penske Racing. This year, Penske has downsized to a two-car team in Cup.

In this case, one fewer Cup team doesn’t mean less people for Roger Penske’s operation. The organization expanded its engineering and technical departments. So for Penske Racing in 2011, less is more. 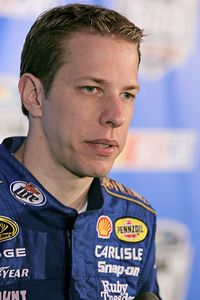 “We had the opportunity to move our people from one area to another within the sport,” Penske said during the NASCAR media tour last month. “As we go into 2011, I feel a lot better because the economy certainly is stronger. You can see that in our businesses.”

But it wasn’t strong enough for Penske to keep three Cup cars operating. Mobil One, which was sponsoring Sam Hornish Jr., moved to Tony Stewart’s team. Penske added Shell/Pennzoil and shuffled things around.

Shell becomes the new sponsor for Kurt Busch, who switches car numbers from 2 to 22. Brad Keselowski’s becomes the driver of the Miller Lite No. 2 Dodge.

Those are the changes most fans will notice immediately, but the reorganization at Penske Racing affects many levels.

Travis Geisler, who was Hornish’s crew chief, moves to the role of competition director. Geisler, who has a mechanical engineering degree from Vanderbilt, drove in both the ARCA and Nationwide series.

“We’re fortunate to have someone as talented as Travis inside the walls of Penske Racing,” said Michael Nelson, vice president of operations for Penske. “His experience as a crew chief, along with his engineering background, will be a valuable resource.”

Paul Wolfe, who helped lead Keselowski to the Nationwide title last year, gets a much-deserved promotion to Keselowski’s Cup team. 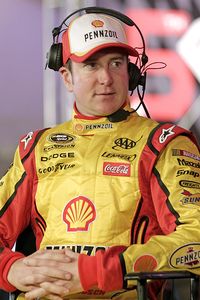 “We’re real proud of what we have here, having nicer stuff and stuff we can win with,” Keselowski said. “Anything is possible because of the progress we have made.”

Keselowski will continue to race full time in two series, but he won’t have a chance to defend his Nationwide title. Those days are gone for full-time Cup drivers with the new rule to declare one series for your title run.

Keselowski was impressive in the feeder league last year, winning six races en route to the championship. But he struggled in his first full Cup season, finishing 25th in the standings with only two top-10s.

Coupled with Hornish’s struggles last season in Cup, it made Busch the only guy left to prove Penske Racing and Dodge could get it done and compete for a Cup title. Busch won twice and made the Chase but finished 11th overall and wasn’t consistent enough to make a serious run at the championship.

He now begins his second season with Steve Addington as the crew chief, which should add stability and familiarity. But Busch also has a new sponsor and a new look with the yellow-and-red Dodge to spice things up.

“We definitely have a charged-up attitude this year,” Busch said last month. “We actually added a new engineer position, so we’re a stronger team with more people coming to the track each week.

“It’s just exciting to have a new look on the car and to have the new number. It will take a little while for all of our fans and everybody to get adjusted to. And then when everybody stops calling me Kevin, we’ll be settled in.”

It’s easy to confuse Busch with Kevin Harvick, who was in the Shell/Pennzoil car and firesuit for years.

Busch won the Cup title in 2004 for Jack Roush in the first year of the Chase. He hasn’t managed to equal the accomplishment for Penske, but Busch believes he’s closer to a second title than he has been in the past.

“Going into my sixth year [at Penske Racing], this is the strongest I have felt going into the season,” Busch said. “We’ve got quite a few things happening here with structural design changes to the chassis, personnel changes and just trying to be as competitive and as sharp as we can be so we start off right.”

Busch started last season strong with two victories and 11 top-10s in the first 18 races to rank fourth in the standings. But he was winless in the second half of the season and posted only two top-10s in the last 11 races. He felt the team got a little too conservative down the stretch.

“We’re proud of the cars we put out there on the track,” Busch said. “But sometimes when things are going well, you think you’ve got to sit there.

“Maybe that’s one thing that hurt us in the second half of last year. You should be continuing to make changes and not get stagnant.”

Penske Racing made plenty of changes in the offseason, so getting stagnant shouldn’t be a problem.

But it will take time to see whether the changes make the team better. Can less become more for Penske Racing? It’s one fewer Cup car, but a few more people in the right places.

Terry Blount is a senior writer for ESPN.com. His book, “The Blount Report: NASCAR’s Most Overrated and Underrated Drivers, Cars, Teams, and Tracks,” was published by Triumph Books and is available in bookstores. Click here to order a copy. Blount can be reached at [email protected]