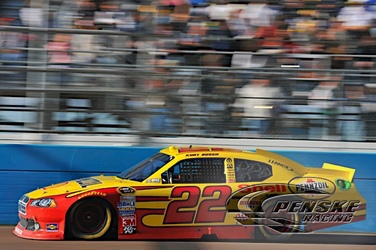 LAS VEGAS (Feb. 29, 2011) – Kurt Busch returns to his hometown this weekend for Sunday’s Kobalt Tools 400 at Las Vegas Motor Speedway hoping for another change of fortune.  The 2004 NASCAR Sprint Cup Champion, who will be driving the No. 22 Pennzoil Ultra Dodge Charger this weekend, craves success on the track that means so much to him personally.

“We’re coming back to Vegas hoping for the kind of change we’ve experienced at some of the other tracks recently,” said Busch, who finished eighth at Phoenix on Sunday and is up to second-place in the series’ point standings entering this weekend.  “We’re really hoping for the type of turnaround that we’ve enjoyed at tracks like Charlotte (Motor Speedway) and Daytona (International Speedway).  We’ve been able to taste success finally on those tracks and Las Vegas Motor Speedway is definitely No. 1 on my ‘hit list’ now.”

In his 10 career races at LVMS, Busch has yet to win and has only one top-five finish and two top-10s on his resume.  While he has an impressive 5.2 average start (his best on any track), he has a 21.9 average finish (his worst on any track).  Busch contends that his Vegas luck is bound to turn sooner than later.

“We have shown a lot of potential through the years in the Vegas races, but we’ve yet to be able to put together many strong showings from beginning to end,” said Busch, who trails younger brother, Kyle, by three points (80 to 77) entering Sunday’s battle on their hometown track.  “Last year’s race is pretty representative of how our history has been on the Vegas track.

“We had a really fast Dodge Charger there last year and wound up winning the pole,” Busch said of his fast lap of 28.614 seconds (188.719 mph) that stands as the track’s qualifying record.  “We started out really on the loose side, but had worked to get the car back under us and we were moving back toward the front.  On a restart at about the 100-lap mark (Lap 94) Jamie McMurray and (Juan Pablo) Montoya crashed in front of us and I was just a sitting duck and got collected.  It was just so typical of how our luck has played out in the Vegas races.”

Busch’s third-place finish in the 2005 race ranks as his best Vegas finish to date and is his only top-five tally.  He has been running at the finish in eight of the races and has finished on the lead lap in five of them.  Busch’s three finishes of 35th or worse has taken their toll on his career average finish at LVMS.  He has led a total of 53 laps, spread out over five races.

“I just get a strong feeling that our luck on our home track is going to change for the good this time around,” said Busch.  “I only have to look at how things have changed so drastically at tracks like Charlotte and Daytona.  I know we can see that trend continue this weekend at Vegas.”

At Charlotte, Busch had never visited Victory Lane prior to last May.  He certainly changed that in an impressive fashion.  After coming from behind due to a brush with the wall, he dominated the final portion of the All Star Race and claimed his first victory in nine editions of the special non-points race.  Busch came back a week later and posted a dominant win in the Coca-Cola 600, leading 252 of the 400 laps, for his first victory in 20 career CMS Cup races.

Just a few weeks ago, Busch experienced the most successful Daytona Speed Weeks of his Sprint Cup career.  The 2004 series champ won the Budweiser Shootout and his 150-mile qualifying race before having to settle for a fifth-place finish in the Daytona 500.

For Busch, a Durango High School graduate who cut his racing teeth on “The Bullring” at LVMS and other short tracks in the Southwest before making it to the NASCAR big leagues, the annual trip to race in his hometown is always special.

“Just to see all my old friends and hang out is so cool and never gets old,” said Busch, who is spending time early this week enjoying a few days of fun and sun in the Mojave Desert.  “There’s always the special guys you grew up with and the great friends who helped you along the way.  I always make it a point to try to spend time with my old short-track teammates and special friends from my old Star Nursery racing days with owner Craig Keough and those guys.  It’s that kind of background that only adds to me wanting to win so bad at Vegas.  There’s nothing I’d like more than to take that checkered flag and have them all there in Victory Lane celebrating the big win with us.

“One of the projects that I enjoyed a couple of years back was getting my historical photos — the various newspaper clippings organized — trying to get the archives in order,” said Busch.  “There’s this one photo that I have which is one of my favorites — if not my very favorite of all times.  I’m posing by my old Hobby Stock car at ‘The Bullring.’  The angle of this photo makes the background very prominent.  In the background, you can see all the big cranes at work and Las Vegas Motor Speedway being built.

“That photo really is a neat representation of my career,” Busch said.  “I think it depicts what has happened about as well as possible.  When I was growing up and racing in Vegas, I just looked at it as something my dad and I could do together and really enjoy spending that time with each other.  Not in my wildest dreams back then did I think we’d be where we are in the sport today.  That photo will always be super special to me.”