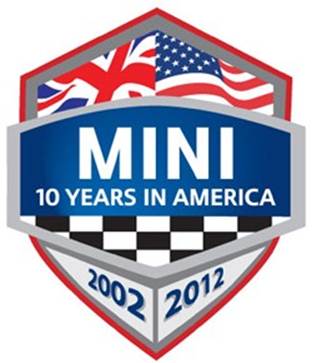 In 2002, the first U.S. Mini dealership opened in San Francisco. With only one model and a gallon of gas selling for an average of $1.25, there were plenty of critics who said the Mini brand didn’t stand a chance in the States.

“Mini launched in the U.S. during the time when gas was cheap and large trucks and SUVs ruled the road,” said Jim McDowell, Vice President of Mini USA in a statement. “Many thought the brand would be a one-hit wonder, and we are extremely proud that we were able to surprise some the toughest critics, and at times, even ourselves.”

Now, ten years later, Mini has six models, gas prices have more than tripled and “small car” doesn’t necessarily mean “cheap car.” It’s safe to say those naysayers in 2002 made a big mistake about the premium small car from BMW.

So, happy birthday, Mini USA, and congrats on convincing an SUV-loving American public that bigger is not always better.

San Francisco – March 21, 2012… Since its 2002 introduction, MINI USA has proven that there is a place for premium small cars in the American car market; and on the 10th anniversary of the brand’s launch, its leaders can confidently say that MINI has successfully established itself as the leader in this growing segment. Over the last decade, MINI has grown its vehicle portfolio from the single Hardtop body style that it launched with in 2002, to include six unique models today; it has expanded its dealer network by two-thirds; and has cultivated a loyal owner community, the likes of which few brands have the honor to call upon as their own.

“MINI launched in the U.S. during the time when gas was cheap and large trucks and SUVs ruled the road,” said Jim McDowell, Vice President MINI USA. “Many thought the brand would be a one-hit wonder, and we are extremely proud that we were able to surprise some the toughest critics, and at times, even ourselves.”

MINI challenged the notion of small meaning “cheap” by delivering a premium vehicle experience in a small package with inspired design. The brand also demonstrated to many motorists that MINI can meet their everyday driving needs. The sales success first peaked when fuel prices spiked in 2008; but another best-year sales record was set in 2011 when fuel prices were more stable, indicating that the brand had successfully come into its own and that motorists’ positive perception and acceptance of premium small cars was growing. Today, one in every five BMW Group vehicles sold in the U.S. has a MINI badge on it, making it a significant contributor to the company’s overall success.

The brand has grown to include six models, Hardtop, Convertible, Clubman, Countryman, Coupe and Roadster, each of which complements the others as part of the lineup. Each vehicle in the portfolio has been developed to have a distinct personality while still delivering on the brand’s longstanding promises regarding sporty performance, striking design, overall efficiency and value.

MINI USA’s dealer network has grown from 66 dealers in 2002 to 112 dealers today, and up to 125 outlets are expected to be open within two years. While all MINI dealers have dedicated showroom space, approximately 60 percent of the existing MINI showrooms are stand-alone facilities. All new facilities moving forward will also be free- standing, and as a direct result of the brand’s success, many dealers are investing to upgrade or move those that are not. By the end of 2014, MINI USA expects that 90 percent of its facilities in the U.S. will be exclusive operations.

MINI USA launched the first vehicle for the U.S. market in the San Francisco Bay Area 10 years ago, and today the brand commemorates its 10-year milestone at MINI of Marin, the newest dealership facility to open, which is operated by Penske Automotive Group – a longstanding partner in MINI USA’s success.

To commemorate its 10th anniversary, MINI USA has developed a media kit that is available on www.miniusanews.com, which highlights some of the feisty, engaging and memorable moments from the last 10 years. Assets include a MINI history timeline, a photo gallery and video.

MINI in the US

MINI is an independent brand of the BMW Group. In the United States, MINI USA operates as a business unit of BMW of North America, LLC, located in Woodcliff Lake, New Jersey and includes the marketing and sales organizations for the MINI brand. The MINI USA sales organization is represented in the U.S. through a network of 112 MINI passenger car dealers in 38 states. MINI USA began selling vehicles in the U.S. in 2002 with the introduction of the MINI Cooper and MINI Cooper S Hardtops. Since then, the MINI Brand in the U.S. has grown to encompass a model range of six unique vehicles.