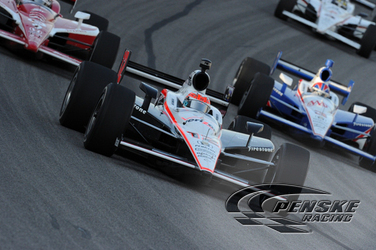 In Style at The Mile: Team Penske has tremendous history and tradition competing at the Milwaukee Mile. In 79 previous open-wheel racing starts at Milwaukee dating back to 1972, the team has recorded seven wins, 11 pole positions and 45 top-five finishes. In the last five IZOD IndyCar Series races run at the Mile, Team Penske has posted two wins and four pole positions.

Mears Was Magnificent at Milwaukee: Current Team Penske advisor and four-time Indy 500 winner Rick Mears posted the team’s first victory at the Milwaukee Mile when he took the checkered flag 33 years ago on June 18, 1978. Mears, who will also serve as a spotter for Helio Castroneves this weekend, earned a total of three wins and five poles at Milwaukee in his career.

Cheesehead at Heart: Ryan Briscoe has an interesting history at Milwaukee as well. The native of Sydney, Australia considers Milwaukee his “home” track as his wife, Nicole, host of ESPN’s NASCAR Now program, and her family hail from nearby Roscoe, Illinois. Briscoe, who has grown into a die-hard Green Bay Packer fan over the last several years, posted his first victory for Team Penske in 2008 at Milwaukee as that race also represented the 300th all-time win for Penske Racing. In the last IndyCar Series race run at the Mile, Briscoe won the pole, led 154 laps and finished second in the race in 2009.

Lucky 11 for Helio?: In 10 previous career starts at Milwaukee, Castroneves has earned three pole positions and two top-five finishes while leading 200 laps of competition. The three-time Indianapolis 500 champion, who earned his first Indy car pole at Milwaukee in 1999, will be looking for his first victory in his 11th start at the historic one-mile oval this weekend.

Power-ful Momentum: Current IZOD IndyCar Series point leader Will Power arrives in Milwaukee on a roll. Power has won three out of the first seven races on the series calendar and he scored his first career win on an oval track last Saturday night in Texas. Power also has won four pole positions this season and has finished in the top three in five of the first seven events. Power has two previous career starts at Milwaukee – he started fifth and finished 11th in 2006 in the CART Series and he qualified fourth and finished 14th for KV Racing Technology in 2008. Power clocked the fastest time at the series test at Milwaukee two weeks ago.

Texas Tidal Wave: Team Penske enters Milwaukee riding a wave of success from its performance last weekend in the Firestone Twin 275s at Texas Motor Speedway. Highlighted by Power’s victory, the team recorded six top-10 and four top-five finishes overall on the evening. Power finished third in the opening race before winning the nightcap while Briscoe came home sixth in the first race and third in the second. Castroneves took the checkered flag for the first race in 10th place and he earned his best finish of the year in fourth place to close out the night.

Head of the Class: With wins at Barber Motorsports Park, Sao Paulo, Brazil and Texas in the No. 12 Verizon car, Power continues to lead the IZOD IndyCar Series standings for Team Penske. Power currently holds a 239-218 point edge over Dario Franchitti in the chase for the series crown. Power is also ranked second in the series oval standings, trailing only Scott Dixon. Briscoe enters this weekend ranked sixth overall in points while Castroneves is 14th in the standings.

Penske’s Premiere Partners: Team Penske is proud to welcome several new sponsors to its family in 2011. Joining Power’s No. 12 car team primary sponsor, Verizon, in the Team Penske stable this season, Guidepoint Systems will compete as a sponsor of the No. 3 car driven by Castroneves this weekend. Transitions Adaptive Lenses will serve as the primary sponsor of the No. 6 car driven by Briscoe at Milwaukee. Team Penske also welcomes Shell-Pennzoil, IZOD, PPG, AAA Insurance and Penske Truck Rental as primary sponsors in 2011 along with new associate sponsors Meijer, Coca-Cola and Comfort Revolution.

Visit Us at Verizon: Power will appear at the Verizon store located at 1200 W. Sunset Dr., Suite 106 in Waukesha, Wis. on Friday night, June 17, from 7-8 p.m. CT. The IZOD IndyCar Series point leader will meet with fans and sign autographs at the store.

WHAT THEY ARE SAYING ABOUT THE MILWAUKEE 225

Helio Castroneves: “We are super excited to go back to the place where I earned my first-ever Indy car pole this weekend in the No. 3 Guidepoint Systems car. Team Penske has been very competitive at the Milwaukee Mile in the past, so I am certainly going there feeling very good. It is great that the IZOD IndyCar Series is returning to Milwaukee as it has such a long history in open-wheel racing and I can’t wait to see all the great Milwaukee fans again.”

Ryan Briscoe: “I’m excited to be returning to Milwaukee, a track which always makes for great racing. It’s a challenging track and I love the high g-forces we feel around there. It is also the site of my first-ever IndyCar win, which makes it very special to me. We tested very well there just a couple of weeks ago and the No. 6 Transitions Team Penske crew is ready for another strong performance in Sunday’s race.”

Will Power: “This is going to be yet another very competitive and difficult race. There are going to be a lot of cars out there and it is going to be very busy on the short oval. Milwaukee is one of my favorite oval tracks. The Verizon car tested great there just a couple weeks ago and coming off our first oval win, we are looking to continue building momentum. It should be a very entertaining race for the fans.”