Joey Logano took first at the Pure Michigan 400 NASCAR Sprint Cup Series race at Michigan International Speedway last Friday. It was his first win since joining Penske Racing, and the win wasn’t the only highlight of the day. Logano broke the track record of 203.241 mph previously helped by Marcos Ambrose. Logano’s No. Shell/Pennzoil Ford Fusion took the track at 203.949 mph. His qualifying lap enters the record books as the ninth fastest pole-winning lap in the history of the Sprint Cup Series.

Kurt Busch and Jimmie Johnson also bested Ambrose’s record, coming in as the second- and third-place qualifiers for the day. Driver Dale Earnhardt, Jr., acknowledged the speed, saying, “The car’s got a lot of grip. I think the track is even more abrasive than the first trip here. The cars are carrying a little more speed than the first trip here in practice and qualifying.”

Overall, it was a pretty good day for Logano on the MIS, which has been described as the sport’s fastest track thanks to the greater amount of banking. He tailed Mark Martin, his childhood hero, in the final stages of the race, finally taking the lead when the No. 55 Toyota ran out of fuel with only three laps to go. Not only did he best Cup veterans Kevin Harvick and Kurt Busch, but he also moved from 16th place in series points to the number 13 spot. There are still three races left before the Chase for the Championship, and Logano’s momentum might push him far enough to make it.

Logano began racing in 2009 at Joe Gibbs racing. This win was the third in his Cup career and the first for 2013. The risk that Roger Penske took on the young driver has paid off. Penske, former owner of MIS during the early 1970s, called Logano’s win one of the biggest in 30 years. It was particularly meaningful since Penske hails from Detroit.

“What a great time to win, being in Ford’s backyard, being in Roger’s backyard,” Logano said in an after-race interview. “I’m glad to make the most of it.” 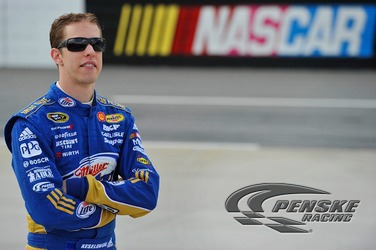 BROOKLYN, Mich. (April 3, 2012) – Brad Keselowski made history at Michigan International Speedway on Tuesday. The Rochester Hills native took the first laps on the newly paved surface at the racetrack during a Goodyear Tire test.
“I feel the decision to pave in October, giving it some time to set was very beneficial,” Keselowski said. “The track should be ready to go in record time for a repave. It should be in great shape when we come back here for the race.”

Keselowski was the first car out at 1:23 p.m., shortly following a rain delay.

He was joined at the test by fellow NASCAR Sprint Cup drivers Jeff Gordon, Matt Kenseth and Juan Pablo Montoya.

Keselowski tweeted throughout the test, saying the track would reach top speeds on Day 2 of the test on Wednesday.

Gordon topped off at nearly 215 mph, he said.

But a Goodyear Tire test isn’t necessarily about how fast the NASCAR stock cars can go, but rather collecting data the tire company can use to build a good race tire for the track’s NASCAR events.

Gordon, who has always liked racing at Michigan International Speedway and considers the racetrack one of his favorites, said there’s a chance to gain a competitive advantage when testing at a newly paved racetrack.

“I think it has some advantages, there is no doubt about that,” he said. “We gather the data any time we can go to any track. Whether it is a repave or not, we are gathering data. But when it is a repave, it is smooth and you get to understand the loads, the grip levels and what the track kind of needs.”

“I love Michigan,” he said. “We want to play our role and help Goodyear develop the best tire for that track.  If we can gather some data that is beneficial to us then we certainly are going to try to take advantage of that, as well.”

During the latest project, 22,000 tons of asphalt was placed on the surface, enough to construct about 5 ½ miles of a two-lane county road.

Milling of the race track began last August and took approximately three weeks to complete. Three-quarters of an inch of asphalt was taken off the top during the milling process.
The project required three inches of total pavement laid down.

The track was paved in two layers with each layer 1 ½ inches thick for a total of three inches. Therefore, the track is now approximately 2 ¼ inches higher than it was previously.

The two-day test concludes 9 a.m. to 5 p.m. Wednesday. The Turn 1 grandstands will be open for fans free of charge throughout the day. Fans may park in Lot 10, off US 12.
Nestled in the lush Irish Hills of Southeastern Michigan, Michigan International Speedway is the Great Escape, a venerable NASCAR national park where fans can get away and enjoy the very best in racing and camaraderie. It’s the love of racing and the thrill of a great time for race fans and drivers alike.