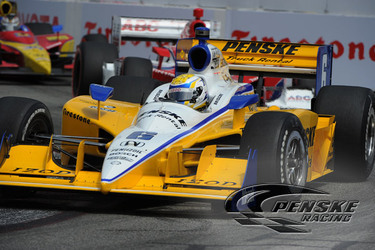 LONG BEACH, Calif. (April 17, 2011) – Ryan Briscoe led Team Penske on his own personal charge back into the IZOD IndyCar Series championship race Sunday with a runner-up finish in the Toyota Grand Prix of Long Beach.

Briscoe brought the No. 6 Penske Truck Rental Dallara/Honda home in second place behind winner Mike Conway, as he helped wash away the memories of two disappointing results to start the 2011 season.

“This feels so good,” said Briscoe, who entered the race weekend ranked 23rd in the series standings and wound up seventh in the championship after the runner-up result. “For a while I thought we were going to get the win today, but Conway was lightning fast. I really had nothing for him at the end. It’s an amazing day and an exciting weekend.”

While Briscoe celebrated his best result of the young season, his teammates recovered from an unfortunate accident. Will Power and Helio Castroneves collided on a restart late in the race, after both drivers spent most of the afternoon running inside the top-five. Power, who won his third consecutive pole to start the season on Saturday, fell back in the field after suffering contact from Castroneves on a lap 66 double-file restart. Power rallied in the closing laps to finish 10th. Though he fell to second in the championship, Power only trails Dario Franchitti by seven points in the early race for the IZOD IndyCar Series crown.

“The Verizon car was strong today,” said Power, who led 29 laps in the race. “It’s definitely not the finish we wanted. I’m not really sure what happened on the restart. I got hit from behind by Helio (Castroneves) but sometimes that’s what happens in racing – especially close racing like this with the double-file restarts. We drove back to finish 10th and made the most of it. It wasn’t a great day for points, but Verizon Team Penske will keep working hard and move forward.”

Castroneves finished 12th in the No. 3 Automobile Club of Southern California Team Penske machine after recovering from the dustup in Turn 1. With Sunday’s result, Castroneves fell to 12th in the point standings.

“First of all, the Auto Club Team Penske crew did a great job today,” said Castroneves. “To be running inside the top-five for most of the race was just amazing. As far as the restart, I’m really not sure what to say. I feel terrible for Will (Power). I wasn’t even trying to pass, but we just made contact. Will is my teammate, and of course you just can’t take each other out. It’s just very unfortunate and I have to say I’m sorry to the team. Good job to Ryan, he deserved at least a second-place finish today. And congratulations to (Mike) Conway on the win.”

Briscoe, who was involved in accidents that weren’t his fault in the first two races of the season, was fastest in practice at Long Beach in Friday and Saturday, but struggled in qualifying and started 12th in Sunday’s race. He took the lead after his race strategist, Roger Penske, brought him to the pits before a full-course caution slowed the field.
“Another great call by Roger Penske,” said Briscoe, who led a race-high 35 laps on Sunday. “It just felt good to get out and lead some laps and be back in contention today. We got a good result and are back on the podium. It’s a huge confidence boost for myself and all of the crew guys.”

The IZOD IndyCar Series resumes May 1 with the Itaipava Sao Paulo Indy 300 presented by Nestle in Sao Paulo, Brazil. The event represents the last of four consecutive road/street course races to start the season before activities begin surrounding the 100th anniversary Indianapolis 500 in May.