Driver of the Year 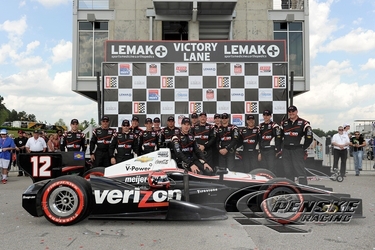 IndyCar’s Will Power narrowly edged NHRA’s Robert Hight in the vote for the first quarter DRIVER OF THE YEAR 2012.

An elite panel of 21 broadcasters and journalists had a difficult time this quarter with many worthy drivers.

Australia’s Will Power came from near the middle of the grid on twisting road and street courses to claim back-to-back victories in the Indy Car series. Ironically, when he won the pole at the season opener, in St. Petersburg, he finished seventh. With those performances he has a healthy lead in the series point’s standings.

“I think my guys feel very confident no matter where we start now that it’s always possible,” Power said after his most recent victory at the Toyota Grand Prix in Long Beach, California.

“It is a great honor to be recognized by such an elite panel. This award is a testament to how hard the Verizon Team Penske crew has worked this year and we hope to keep it going for the rest of the season,” Power said after learning of the award.

At first Barry Schmoyer, President of the DRIVER OF THE YEAR Foundation, was surprised at the vote in which Power beat Hight by one point. “I don’t recall such a close quarterly vote,” he said. On reflection he realized that Power won the third quarter in 2010 by two points. There has only been one tie in DRIVER OF THE YEAR history – in 2002 when Cristiano da Matta (then in Champ Car) took the annual title in tie-breaker over NASCAR’s Tony Stewart based on points earned in the quarterly tallies.

In the voting Power, who drives the Verizon Dallara DW-12/Chevrolet for Penske Racing, had eight first-place ballots and totaled 99 points according to the DRIVER OF THE YEAR points system. Hight, who drives the Auto Club Mustang for John Force Racing in the NHRA Full Throttle Tour’s funny car division, also recorded eight first place votes and garnered 98 points.

Greg Biffle, who leads the Sprint Cup points in the quarter which ended with his victory at the quarter ending race at Texas Motor Speedway, finished third with two first place votes and 78 points.

A total of 16 drivers scored points in the third quarter voting.

In its’ 46th year, the DRIVER OF THE YEAR title is unique. The panel of 21 leading journalists and broadcasters from across the U.S. determines the winner. Three panelists did not vote this time. In quarterly voting, points are awarded on a declining 9, 6, 4,3,2,1 basis. Power will receive a trophy and a Tissot wristwatch to be presented at a race weekend at to be determined.

“I certainly take pride in winning this award and want to thank everyone on the panel,” Power added.