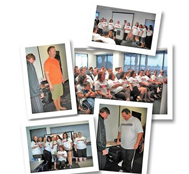 Since starting its Biggest Loser contest seven years ago, the dealership has shed 640 pounds. That’s how much weight employees at the Santa Ana, Calif., dealership have lost by participating in the contest.

A focus on physical fitness and employee well-being contributes to a low absentee rate, high employee retention and productivity. The store sells about 4,000 new and used vehicles annually, making it one of BMW’s top-selling U.S. dealerships.

There also are the weekly massages. And in November 2011 management added guidance resources, which give employees access to financial information, legal support, work/life solutions and confidential therapy.

“We end up the winners,” says Al Parajeckas, general manager of the store, which is owned by Penske Automotive Group Inc. “We have less absenteeism, and they have more energy. They’re happier. There’s less turnover. It all comes back to us in different ways.”

Parajeckas spent about $4,800 last year on health-related programs at the dealership, and it has paid off. The store, which sells the BMW and Mini brands, has about 275 full-time employees. Last year the turnover rate for the BMW employees was less than 10 percent. For Mini employees, it was zero. And BMW Group AG named Crevier BMW-Mini an international finalist for the “Excellence in Sales 2010” competition in the Manager of the Year category. BMW says Crevier is its most-awarded BMW dealership in North America, and it has been the top-selling BMW store in the western United States for 19 years.

One of Crevier’s most popular health programs, the Biggest Loser contest, was started on a bet made seven years ago.

Mike Weldon, finance manager at Crevier BMW, says he was “pushing maximum density” with his weight at 5 feet 11 inches tall and 230 pounds.

“My general sales manager, in jest, would say, ‘Hey you’re looking pretty plump,'” Weldon says. “He said, ‘I’ll make you a bet: If you lose 20 pounds in 3 months, I’ll take you and your wife to dinner.'”

Weldon took the bet by joining a medical weight loss clinic. He got down to 186 pounds and brought down his cholesterol level significantly.

“I felt great, nothing could get me down,” Weldon says.

Weldon has gained back only a few pounds, he says. But he inspired a weight loss contest at work that can help him shed those few pounds.

After Weldon’s success the store decided to offer a contest to encourage others to lose weight, too.

The Biggest Loser contest is held every 3 months. Typically about 30 to 40 percent of the staff participate. It kicks off in January with a health fair at the dealership, Parajeckas says.

“We have health experts take blood pressure, body fat analysis; yoga and fitness experts come in,” Parajeckas says. “All the employees participate. Then we kick off the Biggest Loser contest.”

There’s a weigh-in each Friday. The end goals are to lose the largest percentage of body fat or the most pounds, Parajeckas says.

Prizes include cash, iPads and other items, says Parajeckas.

Crevier emphasizes employee health in ways other than weight loss.

Then each Friday Crevier offers 15-minute massages that book up every week, Parajeckas says.

“We do it because employees love it. It makes them feel better, and it’s one of those things where they start to feel better about themselves, they’re happier, and they have more energy,” Parajeckas says.

Then there’s the in-house health food store called The Rev Cafe that offers food at a discounted price.

All the programs make Crevier a good place to work, and customers sense it, Weldon says.

“Customers tell us, ‘I could have bought my BMW cheaper someplace else, but I come here because of the Crevier experience,'” he says.

And that’s why Weldon says he stays.

“They care about their employees’ health and they support us and make us feel good about being there,” Weldon says.