Revolution of the 3-Wheeler

Does a car really need four wheels? Some industrious manufacturers don’t think so, and they’re bringing the 3-wheeler back to prove it.  Why would grown-ups want to ride or drive a three-wheeled vehicle when sports cars and motorcycles have evolved to near engineering perfection?

Three wheel cars are no longer a concept at auto shows but a real life reality. Perhaps it is all because of the Mattel Big Wheel. Our theory is that Big Wheels were the source of such fun that some drivers will forever attempt to recapture the childhood excitement of careening around driveways on three plastic wheels. With many new three-wheeled vehicles on the market, one has to wonder.

Here are some all time favorite three- wheel cars that have stood out to Penske Automotive Group. Over the years countless manufacturers have tried to make the concept work, including microcar of the 50s and 60s, BMW Isetta, Badsey Bullet, VW GX3 Vortex, Cirbin V13R or the Reliant Robin from “Mr. Bean.”  Three-wheelers ranged from just silly to borderline insane to didn’t even make a dent in the market yet we are still fascinated with them.

Maybe taking a cue from the tricycle which originated in 1680, Benz’s created the Benz Patent-Motorwagen 1886. It is believed to be the first internal-combustion wheeled vehicle that dramatically changed the automobile industry. Three wheels was one stop on the way from horse and carriage to four wheel high speed rides in auto industry history.

because of simplicity in nature they often have a cheaper price tag.

Over time three wheels have been phased out however over the past two or three years we have seen a resurgence of the three-wheeled form. It’s not difficult to guess why: fuel economy is huge priority these days, as is efficient, simple transportation. Consequently, ideas that were once tossed aside are now being reconsidered.

Here are a few recently introduced or upcoming threes. With the exception of tire count, most of them have nothing in common.

The Aptera 2e is a futuristic gumdrop of a car made f to offer very little drag resistance (actually less than a man on a bicycle.) The 2e is propelled by an electric motor powered by a 13-kilowatt-hour lithium-ion battery. Aptera says it has a range of 100 miles with a load of two passengers and 250 pounds of cargo, with the air conditioning on. While still in the initial stages it is believed to run between $25,000 and $45,000. This is great for eco-friendly drivers however with no firm price tag and production date  who knows what drivers will be in store for.

Morgan Threewheeler is a revival of Morgan’s legendary three-wheeled “cyclecar.” It weighs only 1,900 pounds, and can rocket to 60 mph in less than 4.5 seconds. An original Morgan three won the French Cyclecar Grand Prix in 1913. The modern version uses a 2.0-liter 115-horsepower V-twin engine derived from a Harley-Davidson design. The rear wheel is driven by a Mazda 5-speed gearbox and a rubber V-belt. Model has a vintage looks with modern reliability. This model is rich with history but without a lot of the hassle except it is loud and we aren’t sure how well you would hold up if ever in an accident. For $40,000 this vehicle is available now. 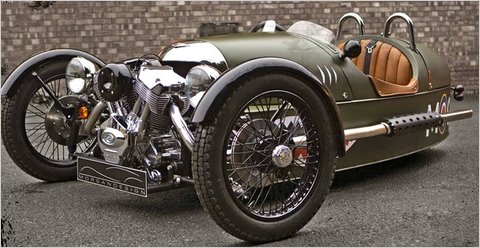 BRP Can-Am Spyder is a motorcycle-like seat, handlebars, a water-cooled 1.0-liter 106-horsepower V2 engine with a reverse gear and a belt drive. Weighing 750 pounds, the Spyder can hit 60 mph in 4.5 seconds. Essentially, it is a snowmobile with wheels and power steering, which makes sense, given that BRP makes Ski-Doo snowmobiles.  For $16,499 you can look cooler and gain better speed than a car can offer.  It is fun to ride, with lots of grip and predictable handling yet you still feel safe. Let’s face it, it’s not a motorcycle but still dangerous and you have no protection from the elements.

Best Trucks on the Big Screen

Futuristic Features Cars Will be Equipped With