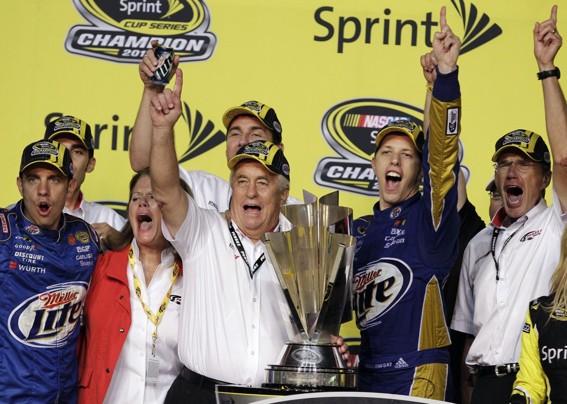 Brad Keselowski didn’t dare take his phone in his car before the biggest race of his life. NASCAR’s social media champion handed it over before pulling on his helmet and chasing the Sprint Cup title he promised to deliver to Roger Penske.

But when Sunday’s race ended, Keselowski crossing the finish line at Homestead-Miami Speedway as the champion, he didn’t even consider getting out of his car to celebrate before getting that phone back.

He did it with Penske, forming NASCAR’s oddest couple to capture its biggest prize.

Penske is considered the gold standard of open-wheel racing — he has 15 Indianapolis 500 wins — and his empire makes him one of the most successful businessmen in America. But until Sunday night at Homestead-Miami Speedway, his NASCAR program was never more than average.

“Personally, I feel amazing that I’ve been able to achieve this in racing,” Penske said. “I think it took guts for me to stay in the sport. We could have thought, ‘Well, we won the Indy 500 15 times and we’re a big deal.’ But I’ll tell you one thing … I think I just woke up here tonight, and it’s a big thrill.”

But the program really turned behind Keselowski, a blue collar, Michigan native, who chugged sponsor Miller Lite’s product, donned goggles to douse the Blue Deuce crew with champagne, and imagined how his life will change as NASCAR’s champion. At 28, he’s the eighth youngest champion in NASCAR history and proud he doesn’t have a date for the Nov. 30 champions banquet in Las Vegas.

“I’ve always wanted to date a celebrity,” said Keselowski, “I’m just throwing that out there. That would be really cool, don’t you think?”

Penske could only shake his head in bewilderment.

“Maybe I am conservative, but I like to have a little fun, too,” Penske said. “And I think when you’ve won the NASCAR championship, the driver, you can kind of give him a little wider path, and he’s certainly taken it side to side. I think it’s all good.”

He was a developmental driver for Hendrick Motorsports in 2008 when he went to see Penske, determined that he could be the driver to bring “The Captain” a coveted Cup championship. He wiggled free from his contract a year later, and had a second-tier Nationwide championship — and a closet full of starched white Penske shirts — to show for his convictions.

Now, three years into the plan, he and Penske have that Cup championship and a connection no one saw coming.

Brad Keselowski has won his first NASCAR championship at Homestead

In 2013, Hitachi will sponsor Castroneves in nine races