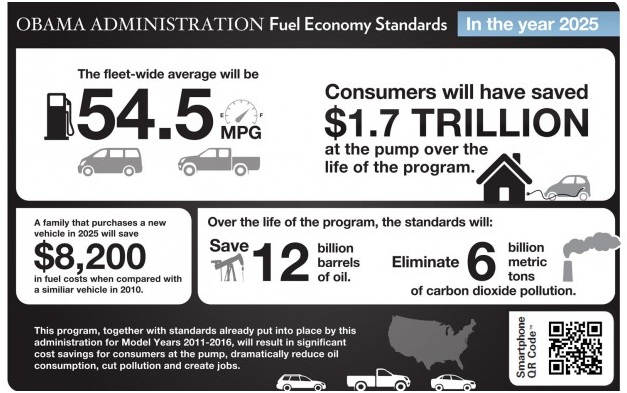 Penske Automotive Group has an update to our July 15 blog on the future of automobile industry and mileage trends as determined by the U.S. government. Today, President Barack Obama met with politicians in Washington D.C. to announce a compromise has been reached, CAFE standards will raise to 54.5 mpg by 2025.

Just after taking office Obama raised the CAFE to 35.5 mpg by 2016. Today’s announcement is a continuation of that plan and also the largest mandatory fuel economy increase in history.

In the spirit of compromise the U.S. automakers have fully jumped on board to support their endeavor. The Obama team has also changed the original target of 62 mpg to 54.5 mpg and created a clause that grants automakers credit implementing fuel-saving strategies.

President Obama said that new 2025 standards will ultimately double new car fuel economy, which means it could “save a typical family $8000.” Multiply that figure, and Obama claims CAFE standards will reduce American dependence on oil by 2.2 million barrels per day, a savings of “$2 trillion over time.”

Penske will continue to keep abreast of this new policy and how automakers are tackling these new requirements. Continue to visit Penske Automotive Groups Social network for regular updates.

Ugliest Cars on the Road