NASCAR: Kurt Busch ready for the battle at Phoenix II 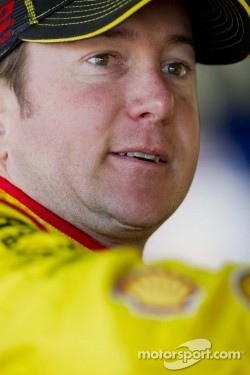 AVONDALE, Ariz. – Shell-Pennzoil Dodge Charger driver Kurt Busch says you might as well consider that this weekend’s Kobalt Tools 500 is being held on “Arizona Motor Speedway” or maybe “Avondale International Raceway.” The 2004 series champion’s point is that the one-mile band of asphalt that the premier stock car series has raced on since 1988 has undergone such an immense change that it’s “totally different from the old Phoenix International Raceway.

“The scenic location, the grandstands and the facilities may remain the same, but this is definitely not your old PIR that everyone had gotten accustomed to,” said Busch, whose record on the old layout boasted one win, four top-five finishes and 10 top-10s in 17 races. “It’s a case of throwing all your old notes and data out the window because it is like racing at a brand new track. All the knowledge you’ve gained and logged before there doesn’t apply at all now.

“It’s just a totally different track,” continued Busch. “After the testing we all did there, we’re coming back convinced there’s only going to be one groove and it won’t be very wide. Restarts will be treacherous. We’ll see how it shakes out. It will be a ‘fill the tank up with gas and ride it to the end’ situation with how the tires did not and likely will not be wearing out there this weekend.

“It’ll be a big wild-card race as far as the big picture is concerned. It’s a huge challenge, but it’s the same situation for everyone out there. I just hope like heck that if there’s a late caution, I am running in an odd-numbered spot and can line up on the inside for the restart. If you’re stuck on the outside there at the end, it could be a huge blow. With every position meaning a point in the standings, it could be very wild at the end of this one on Sunday.”

Immediately after the last visit to PIR for the Feb. 27 Subway Fresh Fit 500, track crews went to work reconfiguring the track where the late Alan Kulwicki claimed the first big league victory on Nov. 6, 1988. After 30 races were held on the old layout, construction workers made tweaks to the track’s banking and a major adjustment to the “dogleg” on the backstretch.

The backstretch “dogleg” that was more of a flat “jut” than an actual turn has been transformed into more of a distinct turn with the same 10 to 11 degrees of progressive banking as is in Turns 1 and 2.

“They even widened the frontstretch, too,” said Busch of the straightaway in front of the main grandstand that is now 10 feet wider than was the case with the old layout.

While Busch’s primary focus entering this weekend’s return to the “new PIR” is the immediate challenge that the new layout presents, he is also cognizant of the importance to be competitive during Sunday’s race at Phoenix and the season finale on Nov. 20 at Homestead-Miami Speedway.

“Even though we won the race at Dover during the Chase, we just haven’t had the consistency we needed and haven’t put the numbers on the board that we needed to,” said Busch, who has a 10.4 average start and 16.9 average finish during the eight Chase races. “Getting caught up in the crash at Talladega pretty much wiped out any chance of a championship run and we’ve been trying to get it turned around since.

“From a big-picture standpoint, we need to be competitive in these final two races of the season. Everyone will be in the same boat at Phoenix this weekend and we’re hoping we can be the guys who get the new configuration figured out and catch a few breaks along the way. If we can do that and then go down to Homestead and have another competitive weekend, it’ll be just what we need to look back on our season as a huge success and feel good about it.”

“We’ve just had a rough time out there since Talladega and we’ve been trying to get our competitive rhythm going again,” offered crew chief Steve Addington. “We know our Shell-Pennzoil Dodge Team is capable enough to end this season off on a high note. Kurt and everybody else on our team are hungry for another win or two in the next couple of weeks and we’ll all be out there giving it everything we have to get the job done.”

Busch, Addington and the No. 22 Penske Racing Dodge Team will be racing the “PRS-748” chassis this weekend at Phoenix International Raceway. The action in the desert this weekend will mark the first time out for the car in the “Double-Deuce” Shell-Pennzoil colors. However, Penske Racing teammate Brad Keselowski drove this car dressed in the No. 2 Miller Lite scheme during the Sprint All-Star Race at Charlotte (finished 18th), in the Brickyard 400 at Indianapolis (started fifth & finished ninth) and the September Dover race (started 15th & finished 20th). The “PRS-749” chassis, which Busch raced in both Richmond races this season, will serve as the backup Shell-Pennzoil Dodge Charger this weekend.

Penske Thanks and Supports Veterans