“Come Together” Over the MINI 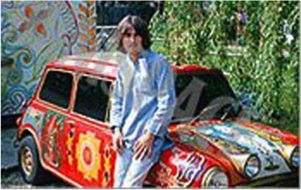 If you’re a fan of the MINI, you’re in good company.  The MINI was a favorite of the Beatles, particularly George Harrison.  The music group that started Beatlemania not only had great talent for music, but great taste in cars.  Beatles fans and MINI fans can “come together” over these fun facts about the Beatles’ Minis.

The Beatles’ Minis were gifts from manager Brian Epstein.  He gave all four members their own Mini.  These weren’t just any Minis though – they were customized by Harold Radford Coachbuilders.  Radford’s updates included adding a full leather interior, a Rosewood veneered dash, and electric windows.

George Harrison, the Beatles’ lead guitarist, had a particular affinity for his Mini. Like the other Minis, Harrison’s original 1966 Mini Cooper S became a “Radford Mini De Ville GT.”  George’s Mini was outfitted with Rear VW Beetle lights fitted sideways, front fog lamps, a Webasto sunroof, black leather interior, and a metallic black exterior that was soon painted to match the psychedelic cosmic design of the time period.  With the new paint job, the car went from black to bright red and featured mystical eastern designs, no doubt inspired by Harrison’s trip to India. 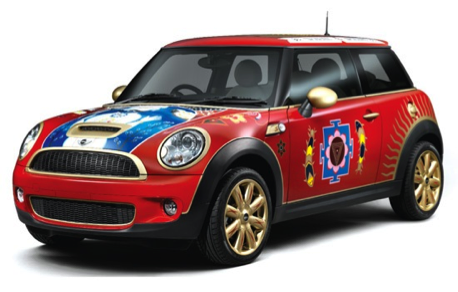 Harrison’s Mini would later appear in the 1967 film the Magical Mystery Tour, which follows the Beatles’ journey in a bus across England.  Along the way, they come across a marathon race, and Harrison and Lennon enter with Harrison’s Mini. It should come as no surprise that the Beatles had Minis – in the 60’s and 70’s, the Mini was very popular among celebrities and a bit of a “fashion statement.”

Harrison maintained his Mini over the years, and it was even exhibited at Goodwood in 1998.  In 2009, Mini resurrected the model that Harrison used to own to celebrate the brand’s 50th anniversary.  They gave a fresh interpretation of Harrisons original Mini, and the guitarist’s widow, Olivia Harrison, auctioned it off for charity.

“George was a huge MINI fan and he would have enjoyed creating this new version.  The fact that MINI’s anniversary celebrations will also benefit our foundation has made it an enjoyable as well as meaningful collaboration,” said Olivia Harrison at the time.

Since the 60’s, the Mini has been a cultural icon, and has enjoyed much popularity throughout its lifetime.  The Mini has featured in many movies, including The Italian Job, The Bourne Identity, and Lara Croft: Tomb Raider, and also in many television shows like Mr. Bean.

What do you think of George’s beefed up ride?

Hyundai i40 Gets Golden Award at Euro Car Body Conference