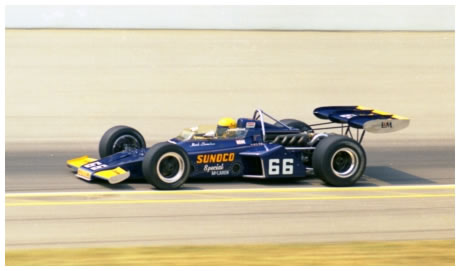 McLaren claimed its first victory at the Indianapolis 500 forty years ago on May 27, 1972, with Mark Donohue behind the wheel of the number 66 Sunoco-Penske.

Featuring an Offenhauser 4-cylinder turbo engine, 700-750 bhp, and a Hewland LG 500 4-speed transmission, team owner Roger Penske ran two cars – one for Donohue and the other for Gary Bettenhausen. In the end, Donohue led the last 13 laps of the race and earned his place in history as well as Penske’s first victory at the 500.

McLaren went on that year to become the only team in history to ever win at Indianapolis, in Formula 1 and 2 and in Can-Am in the same year.  In addition, McLaren saw the checkered flag two more times at the Indianapolis 500 in 1974 and 1976 with driver Johnny Rutherford.

“Following three years of its legendary domination of the Can-Am series, it was of little surprise when Team McLaren’s 1970 debut at Indianapolis began with the track opening for practice on May 1 and all three team cars promptly going out, nose-to-tail in a stunning show of readiness,” said Donald Davidson, Indianapolis Motor Speedway historian. “They didn’t win that year, but with a markedly different design in 1971, Peter Revson sat on the pole and finished second. With a Penske-entered McLaren winning in 1972 with Mark Donohue; McLaren’s own Johnny Rutherford capturing two poles and two races between 1973 and 1976, and Penske’s Tom Sneva coming along in 1977 to turn the Speedway’s first ever 200 mph lap, it seemed like EVERYBODY had to have a McLaren.”

McLaren will participate in the second annual Celebration of Automobiles on May 12, 2012 from 10 a.m. to 4 p.m. at the Indianapolis Motor Speedway infield.  With support from the Indianapolis Motor Speedway Hall of Fame Museum, the display will feature the 1972 winning Indy car, McLaren M16B.  The dichotomy of old and new and constant innovation will be illustrated with examples of the 2012 McLaren 12C and rolling chassis.

“McLaren has a long and rich history in racing, especially in North America,” explained Tony Joseph, Director, McLaren Automotive, Inc. “We couldn’t be more proud to celebrate the 40th anniversary of McLaren’s first win at Indy within the same year we launch McLaren Automotive, our own dealer network and our first model, the MP4-12C.

“The McLaren M16B was designed by Gordon Coppuck and had innovative and front and rear wing design for its time. Even looking back 40 years ago, it offers great examples of McLaren’s ongoing strive for technological innovation and to be the best in everything it does,” said Joseph.

Crews Clean up Belle Isle to get ready for Grand Prix