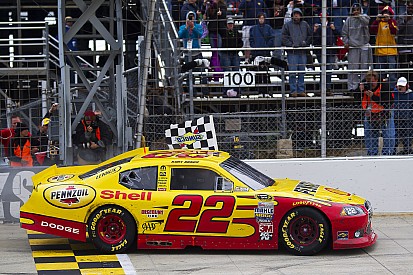 PRESS RELEASE // DOVER, Del. (October 2, 2011) – It took Shell-Pennzoil Dodge driver Kurt Busch 23 races and more than 11 years to finally defeat the “Monster Mile,” but he came through with an impressive victory in today’s “AAA 400” here at Dover International Speedway. For the 2004 NASCAR Sprint Cup Champion, today’s big win couldn’t have come at a better time.

“It was just perfect execution today with making the car better during the race,” Busch said of what contributed to his 24th career NASCAR big-league victory. “Our Shell/Pennzoil Dodge Charger was fast. Some of our struggles have been when the track rubbers-in; we’re not exactly where we want to be. This was an awesome day for Shell, Pennzoil and Dodge. I couldn’t be happier right now. To win in a Sprint Cup race in the Chase, this is what it’s all about. This is the playoffs. We had everything go wrong for us last week (at New Hampshire, where he struggled to a 22nd-place finish); we had everything go right for us this week. We just need nice, smooth races from here.”

Busch made his very first career NASCAR Cup start on this track on September 24, 2000, a day after winning a NASCAR Truck Series event here on this one-mile high-banked concrete track. Even though he had been competitive in several races through the years, a pair of fourth-place finishes highlighted his career statistics here until today’s huge victory.

“It’s such an intense place,” Busch said of the challenge that racing at Dover presents. “It’s hard to get the perfect handle on the race car. A driver really has to compensate a bit here, especially with the race track rubbering-in. To be able to conquer the Monster Mile, to have that Miles’ trophy now on the trophy shelf, I felt like I was missing something over the years. To make my first win here 11 years ago in 2000, it’s been an amazing journey. I didn’t think that it would take this long to get to victory lane, especially when I won my first-ever Truck race here. This is a tough race track and when you’re racing the best of the best, you have to be perfect. You have to have a good team and I just have to thank Penske Racing for continuing to provide us the top-quality cars for what it takes.”

Busch started today’s battle from the outside pole and led for the first of what would be five times on Lap 3. His Steve Addington-led “Double-Deuce” team continued to massage their Dodge Charger throughout the race with subtle air pressure and wedge adjustments. But their car was so strong here today that they never fell back any further than sixth in the running order except when green flag pit stops were cycling around.

“Right around half way, I was scared,” Busch said of his car’s handling situation. “I wasn’t sure which way to go. Steve just kept making some air pressure adjustments in certain areas and the car just kept coming back to us. The first 100 were perfect. The last 100 were prefect.” 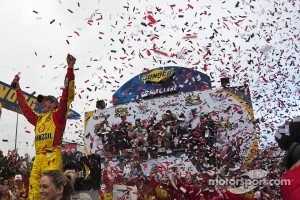 Busch was able to grab the lead away from five-time and defending series champion Jimmie Johnson on the last restart of the race and paced the field for the final 42 circuits (of the 90 total he led). At the finish line, it was Busch taking the victory by 0.908 seconds over Johnson.

“I just wanted to get out in front of (Jimmie) Johnson,” Busch said of the final run to the checkered flag. “The first restart, I was on the high side. I didn’t know what to choose, low or high. I just wanted to get that jump on him and stretch our lead because I thought that he would reel us back in with about 10 to go. We just had to maintain and bring our Shell-Pennzoil Dodge Charger to Victory Lane.”

Busch’s win here today jumped him up five spots to fourth in the NASCAR Sprint Cup points with seven races remaining to determine the 2011 series champ. Harvick is the current points leader with 2,122 points. Carl Edwards also has 2,122 points. Tony Stewart and Busch are nine points out of the lead with Johnson fifth and 13 points out of first. Penske Racing teammate Brad Keselowski (who had power steering issues here today and finished 20th in the Miller Lite Dodge) is sixth with 2,108 points. Kenseth (2,108), Kyle Busch (2,107), Jeff Gordon (2,103) and Dale Earnhardt Jr. (2,088) round out the top-10 points players.