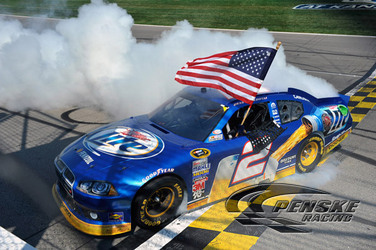 KANSAS CITY, Kan. (June 5, 2011) – Brad Keselowski, driver of the No. 2 Miller Lite Dodge Charger in the NASCAR Sprint Cup Series (NSCS), earned a hard-fought victory in the STP 400 at Kansas Speedway (CMS) on Sunday afternoon. Keselowski and crew chief, Paul Wolfe, executed a perfect fuel strategy over the final 20 laps to secure the win. The result represented Keselowski’s second career NSCS win and first with Penske Racing, following his victory at Talladega Superspeedway in April of 2009.

The win also marked the first points-paying victory for Penske Racing since Kurt Busch won the Coca-Cola 600 last May.

Keselowski began the 400-mile event from the 25th position after he posted a lap of 31.303 seconds, or 172.507 miles per hour, during Saturday’s qualifying session. As the race began, he immediately began working his way towards the top-20, where he found himself by lap nine. He radioed to Wolfe that the balance of his car was decent under the hot Kansas conditions, but that there was room for improvement on his ability to turn the Miller Lite Dodge in the center of the corners. Keselowski entered pit road, under the green flag, at lap 45. Wolfe called for an air pressure adjustment in the Goodyear radials and fast pit work by the Miller Lite crew – which has raised its level of performance even higher over the last two weeks – resulted in Keselowski returning to the racing surface in the 17th position.

While still fighting a tight-handling condition, Keselowski was able to turn laps faster than the race leader as he worked his way inside the top-15 on lap 54. Wolfe continued to tinker with the car’s air pressure and the Miller Lite pit crew continued to gain spots on pit road for their driver. On lap 74, Keselowski entered the top-10 for the first time on the day, an improvement of 15 positions from the start of the race.

Following a lap 111 caution, Wolfe ordered the first track bar adjustment of the afternoon, which allowed Keselowski to remain at the front of the field. The Penske Racing driver told his team that if he were able to secure “clean” air, he felt he could run out to a sizeable lead. Wolfe was able to provide as much “clean” air as he could by keeping Keselowski on the racing surface for several more laps after the race leaders began making their way down pit road around lap 200. Following a green-flag pit stop on lap 210, Keselowski had plenty of room to work and he began turning some of the fastest laps on the track.

Upon returning to the track following the lap 210 pit stop, Wolfe advised Keselowski that he was three-quarters of-a -lap short from having enough fuel to make it to the end of the race. At lap 234, Keselowski entered a fuel-saving mode. All of the cars in front of Keselowski would have to come down pit road for a splash of fuel to make it to the end. One by one they all made their stops and Keselowski assumed the lead from his Penske Racing teammate, Kurt Busch, on lap 259. He was able to conserve plenty of fuel to cross the finish line first, while having enough fuel to do a celebratory burnout and find his way to Victory Lane.

Busch, who led 152 laps in the STP 400, finished ninth following a late-race pit stop for fuel.

“We’ve been so close with the Miller Lite Dodge this year,” said Keselowski. “We’ve been plugging away. I had a car last week that sat on the pole and had a shot at it and just caught the wrong line on the restart.  The same thing at Dover and Darlington – we could just never catch that good break.  You can only put yourself in that position so many times before you’re going to catch the right break.  We caught a great break today because of all the hard work by the Miller Lite team that works on these Dodge Chargers.  I knew we had a top-10 car today and we were able to get a win. That’s what good teams do. We got great gas mileage and that doesn’t hurt either.”

Keselowski and the No. 2 Miller Lite team will next compete at the Pocono 500 at Pocono Raceway on Sunday, June 12. Coverage will be seen live beginning at 1:00 pm ET on TNT. The race will also be heard on the Motor Racing Network and Sirius XM Satellite Radio Channel 90.