Keselowski gets his game on

LAS VEGAS — Less than six hours before being honored as the 2012 Sprint Cup champion Friday, on the biggest night of his young career, Brad Keselowski was in the basement of the Penske Ferrari dealership attached to the Wynn Las Vegas.

He wasn’t choosing one of the sleek, exorbitant cars to purchase with his share of the $5.7 million bonus he got for winning the title.

He wasn’t even checking out the merchandise that includes some of team owner Roger Penske’s prized show cars.

He was playing video games.

Keselowski was in the cockpit of a Formula One Ferrari shell that is part of the Shell Professional Simulator Experience. He was tackling The Circuit of Americas course in Austin, Texas, that recently hosted its inaugural Grand Prix event. 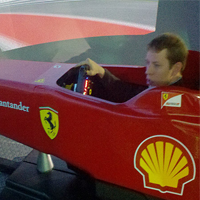 He was turning laps of just over 1 minute, 39 seconds, slightly more than three seconds behind the pole time of 1 minute, 35.657 seconds that Sebastian Vettel had on this 20-turn road course.

“I left something out there,” Keselowski said afterward.

This could be the future of all motorsports. Ferrari already uses the simulator to train prospective F1 drivers before they get on the track and educate veteran drivers learning new circuits.

Penske was so impressed with how realistic the machine was, how it was so finely tuned that it simulated every bump, slide and wiggle — everything but g-forces — that he is looking to possibly purchase one for his IndyCar organization and perhaps one for the NASCAR side if it can be adapted to it.

“In talking to Brad, it focuses you mentally, whether it’s a road course or whatever it might be,” Penske said. “I’m really interested in seeing if it is worthwhile for us.”

Tiny beads of sweat were on Keselowski’s forehead after about 20 minutes in the machine, indicating just how realistic it is. The 28-year-old driver was mildly frustrated that he could have turned a faster lap. There was almost the same intensity on his face that he had before the Sprint Cup finale at Homestead-Miami Speedway, where he clinched the championship.

The competitive juices were flowing as Keselowski tried to get everything he could out of the machine, just as though he were qualifying for the Daytona 500.

Penske was equally captivated by the simulator during a social gathering the night before. Like Keselowski, he almost had to be dragged from it.

“I wanted to get more time in it, but I was so damned bad at it that I put somebody else in it,” Penske said. “But I sure want to get back in when nobody is watching to see if I could get better.”

He may have that chance on Dec. 14 when the simulator is transported to Penske Racing in Mooresville, N.C., for the team Christmas party. It’s such a big event that Anton Stipinovich, who heads the company All In Sports, which developed the machine, is expected to make the trip from Modena, Italy.

Only two other machines are exactly like this in the world. One is owned by the Ferrari Driver Academy in Italy, and the other is in the home of two-time world champion Fernando Alonso.

They’re not cheap. They run about a half-million dollars, well more than Keselowski will pay for the tank he really does plan to buy with his share of the championship profit.

But if you’re a car owner — or a driver like Alonso with money to spare — this is an investment in the future. That’s particularly true in F1, in which testing is limited.

“The use of simulation testing is completely unlimited, which is why they have become so important to teams and sponsors [in F1],” said Anthony Dealtry, the senior account executive for Crunch Communications, which travels with this machine.

The simulator is designed to be as realistic as possible, down to the car getting faster as the tires and brakes get hot. Dealtry doesn’t see why it can’t be adapted to IndyCar and even NASCAR, although the value in stock cars wouldn’t be as great because so many tracks are ovals compared to road courses, where you need more time learning the turns.

And while people like me can have fun in them, these aren’t toys. The hand-eye coordination and the ability to multitask between changing gears and other telemetry while keeping up with the track separate the amateurs from the professionals in a hurry.

Keselowski showed quickly the skills that helped him become NASCAR’s newest champion. After an initial lap of 1 minute, 55 seconds, he was down to 1 minute, 41 seconds.

If it weren’t for the banquet, he probably would have stayed in the machine until he broke 1 minute, 36 seconds.

Dealtry was impressed, but a minute and 35 seconds?

The simulator is addictive. Keselowski was so hooked that he called a Penske official at 11 p.m. on Thursday and asked if he could open the shop for him and a few other drivers.

It didn’t happen, but he was back the next morning immediately after a dress rehearsal for the banquet.

“What was so impressive about Brad was his ability to spot the right line around the track to make sure he was picking up time,” Dealtry said.

I didn’t perform nearly as well, finding the right line into the wall more than once. Whether it was adjusting to the left-foot brake pedal that was stiffer than a 2-by-4, my inability to watch the track and the light that tells you when to change the flappy-paddle gearbox, or just pure lack of talent, I was a wreck waiting to happen.

But I know my spot in the world is behind a keyboard, just as Keselowski knows his spot is behind the wheel.

Someday, Keselowski admittedly would like to give an open-wheel car a spin for real. But Penske isn’t ready to offer him a ride in the Indianapolis 500 like he did to Tony Stewart.

That offer, by the way, was almost like an empty promise, since Stewart has made it clear he has no desire to do another double — Indy and the Coca-Cola 600 on the same day — and the timing of the two events makes it almost impossible to do.

“I’m not sure I’d make the recommendation today,” Penske said of putting Keselowski in an Indy or F1 car. “He has some [goals] left in NASCAR before he gets to … open wheel.”

Or, as Keselowski said, you won’t see him in an F1 car as “long as my Cup team keeps running this awesome.”

But at least for a few days in Vegas, he could pretend.

In 2013, Hitachi will sponsor Castroneves in nine races