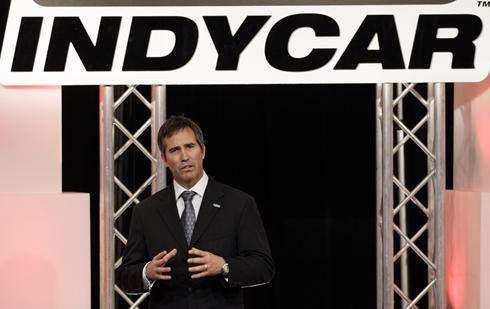 Next season, oval races will include double-file restarts. He’s bringing back a race once thought to have been lost, and he’s even hired away a former NASCAR executive to help the series make inroads in Hollywood.

It’s all part of a new strategy as the series celebrates the centennial anniversary of the Indianapolis 500.

“I’m not afraid to steal an idea,” Bernard said before speaking at Tuesday’s State of IndyCar meeting. “It if works, great.”

The idea for the double-file restarts was proposed by the series’ most successful team owners, Roger Penske and Chip Ganassi, both of whom have seen it work on the Cup circuit.

But the rule may be modified for the more sensitive IndyCars.

Double-file restarts will not be used on road or street courses because of limited passing zones and officials are still debating whether to move lapped cars to the back of the field — which some drivers prefer.

The debut could come at the trickiest track on the circuit, Indianapolis, something three-time race winner Helio Castroneves and other drivers are lining up against.

“Right now, all the drivers are together and we have a different opinion about it,” he said. “But I’ve got to give them credit because they are trying to change things.”

Marco Andretti worries that putting two lines of traffic on the ovals could force cars in the outside lane into the “marbles,” making the racing more dangerous.

The bigger question is will it make races more interesting, or just more dangerous?

Brian Barnhart, the series’ president of operations and competition, is sure the drivers are capable of pulling it off at “this level of racing,” but Danica Patrick isn’t sure the IndyCar Series will get the same results they’ve had on the Cup circuit.

“We accelerate differently and you can’t just bump other cars to get up in front, so it will be different,” said Patrick, the most recognizable IndyCar driver and a veteran of both circuits. “Look, I’m all for change and if it doesn’t work, I have no doubt they’ll take it out.”

That change is only one part of the strategic plan.

Before the meeting, Bernard announced the league was officially ditching the Indy Racing League name, in favor of IndyCars, and was opening a new office near Los Angeles in an effort to bring on more celebrities. Sarah Nettinga, who worked in a similar capacity at NASCAR, will manage the office in Santa Monica as senior vice president of media and entertainment.

It didn’t take long for Hollywood style to meet Indianapolis.

As the annual meeting began, lights were dimmed, music was turned up and drivers walked in through fog.Bruce Springstein’s “Born in the USA” blared when the first of seven American drivers took the stage. Scotland’sDario Franchitti, the reigning IndyCar and Indy 500 champ, paraded through the hotel ballroom with the Gordon Pipers — a local bagpipe group that is as traditional at the Indy 500 as the starting command.

But Bernard wants more than just a new image.

• Drivers now will have to go faster to start a race, qualifying at 105% of the fastest lap time. Previously, it had been 107%. The move is designed to keep drivers from going too slow and causing race day problems.

• Pit selections now will be based on qualifying performance at a previous race rather than entrants points. But the results will come from the previous event on a similar venue, or road course to road course and oval to oval.

• Drivers will have to use the same tires during a qualifying segment on road courses. They can switch between segments, just not during them.

• Children as young as 9 years old now can purchase tickets to go into the garage area of all races except Texas.

• At Indianapolis, children 12 and under will be admitted free when an adult buys a general admission ticket to the race.

• And Bernard said he will consider looking at ways to set new track records, if the series can keep it safe for drivers.

“The fan is the most important thing we have,” Bernard said. “You can take the best entertainers in the world and the one who is reaching out to the most fans will be their favorite. So we need to make sure our fans have a compelling entertainment.”

Two new slogans for this season also were unveiled Tuesday.

The series will use Real Drivers, Real Racecars, Real Fast. The Indy 500 is being dubbed “the most important race in history.”

Whatever Bernard is doing, it is attracting new sponsors.

Over the last 12 months, IndyCars has signed 15 new partners. That includes Starwood Hotels and Resorts, which announced Tuesday it has reached a new three-year deal to become the series’ official hotel.

And after saying in November that the series would not run in Edmonton this season because it couldn’t get necessary upgrades, the race is now back on schedule for July 24.

Edmonton city spokesman Robert Moyles said the issue was resolved under an arrangement to cover the extra cost through about $2 million in parking revenue in the area and $1 million from the local business community.

All of it, Bernard insists, bodes well for the future of the sport.

“I feel a tremendous amount of progress and momentum right now,” he said. “I think we’re better today than we were March 1st, so we’ve got to continue to make it happen.”

Copyright 2010 The Associated Press. All rights reserved. This material may not be published, broadcast, rewritten or redistributed.