If this Bugatti Could Talk 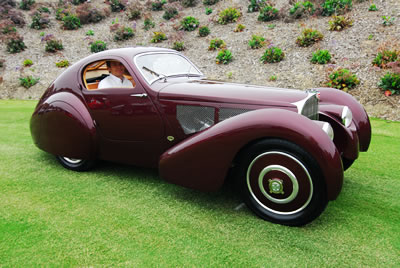 When it comes to a storied provenance, this vintage Bugatti’s eight-decade journey through time has taken it from track racer, to luxury icon, and back again.

As unlikely as its elegant current bodywork would suggest, this Type 51 was built as a Bugatti factory team Grand Prix car in 1931. The Type 51 was essentially a development of that Type 35, employing its steel channel frame, solid front and rear axles, unique spokes on aluminum wheels with huge finned drums that are cast integrally and clad in horseshoe radiator and taper-tailed aluminum bodywork; but fitted with the latest twin-cam version of Bugatti’s classic straight-eight engine.

This supercharged, 2.3-litre motor, with cylinder head “inspired” by American Harry Miller’s racing engines, produced 160 hp (185 on alcohol) and through a four-speed gearbox could propel the skinny-tired Type 51 to about 225 mph.

Type 51’s team cars were piloted by Italian Achille Varzi, and two of France’s racing heroes Rene Dreyfus and Louis Chiron in their 1931 debut season. Among the year’s successes were Varzi’s win in the Tunis Grand Prix, Chiron’s victory in the Monaco Grand Prix and the pair teamed up to win the 10-hour French Grand Prix at Montlhery.

Bugatti gave Type 51 chassis number 51133 to Chiron at the end of the 193. In 1936, it was sold to Andre Bith. Young Bith cut off the tail and moved the spare back from its side-mounted position, painted it black and upholstered it in white leather, which likely helped attract femmes fatales of the day.

But Bith also fancied himself as a car designer, and drew up plans for a coupe with a dramatic central tail fin which was seemingly inspired by the exotic-looking Bugatti Type 57 Atlantic; designed by his good pal Jean Bugatti.

The car and the drawings were handed over to coachbuilder Louis Dubos in 1937, who finished the project within a few months. Painted in Bugatti blue with tan leather interior, it looked sensational, but as one story goes, it didn’t quite suit Bith’s girlfriend, the reigning Miss France, who had him repaint it in a darker shade.

Leave it to female intuition, because it was then entered it in the Bagetalle Concours d’Elegance, where it won first in class and second overall honors.  Shortly after this, the Bugatti went through a string of owners. Eventually, the car found its way to the United States and into the hands of an enthusiast who removed the Dubos body and began a restoration of the chassis.

The unfinished Type 51 chassis was then purchased in the early 1960s by Nethercutt Collection and Museum in Sylmar, Calif. Here’s a replica Grand Prix body created for it and, with cycle fenders and lights fitted, it was driven on the street and raced from time to time in vintage events.

But museum curator says research revealed the chassis had been fitted with the lovely coupe body created by Dubos. And this was tracked down to a gentleman who had purchased it and then created a completely-accurate replica Type 51 chassis and engine to slide under it.

The Nethercutt collection purchased this car after its owner’s death and began the process of reuniting the Dubos body with the original 51133 chassis. After a full restoration was completed a few years ago, it won “Best in Show” at Amelia Island and added the Best of Show Honors awarded to Jack and Helen Nethercutt at the Dana Point concludes at the end of this June.

And the story doesn’t quite end there. The leftover bits – the replica chassis and body – are being brought together to create an accurate representation of one Bugatti’s most legendary racers.

If you would like to like to see the Bugatti Type 51 firsthand, you can visit it at Nethercutt Museum.  However, if you are interested in getting a more modern version in your driveway, feel free to stop by Bugatti Veyron of Scottsdale, Arizona.