Dinger’s Advice on Importance of Doing Well On Intermediate Tracks 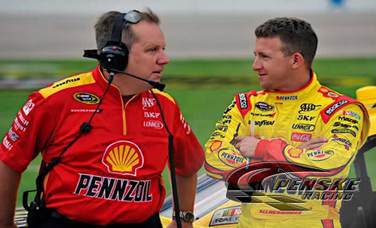 KANSAS CITY, Kans.  (April 17, 2012) – AAA Dodge driver AJ Allmendinger is quick to tell you that the 1.5-mile “intermediate” tracks along the NASCAR Sprint Cup tour are not at the top of the list of his favorites.  But, knowing that they make up 40 percent of the schedule, “Dinger” certainly recognizes their importance as far as the big picture goes.

“I’ve always said that the short tracks, the one-mile tracks and the road courses rate as my personal favorites,” offered Allmendinger, coming off a 15th-place finish at Texas last Saturday night that moved him up to 19th in the current point standings.  “But with us running so many races on the intermediate tracks, you have to accept the fact that you have to get all you can out of each of those races.
“It was Texas last weekend and we’re headed into another race on those tracks at Kansas this weekend,” Dinger said of Sunday’s STP 400 on the 1.5-mile Kansas Speedway.  “We’ve had some pretty strong runs there – a couple of top-10s – and have a decent record there.  We’re coming in hoping to put together a solid weekend with a good qualifying effort on Saturday and a really competitive run on Sunday.”

Entering Sunday’s race at Kansas, the final event before the facility gets a full repaving, Dinger has an average start of 21.4 and average finish of 17.6 in five career starts.  His ninth-place finish in 2008 rates as his best result to date.  His 27th in this race last season is his worst finish at Kansas.  He has been running at the finish in all five races and has an amazing 99.776 percent lap completion average (1,337 of 1,340 laps…only three unfinished laps),

The Kansas track ranks fourth among the intermediate tracks as for Allmendinger’s average finish (behind Homestead’s 10.2, Atlanta’s 14.4 and Chicagoland’s 16.8).

“Kansas is another track where we are looking for our first top-five finish,” said Dinger.  “As always, the goal is to win it.  If that’s not possible, then you shoot for a top-five or a top-10.  But, just like at all these races, it’s so key to come out of there with everything that you can get.  It’s so important to take a day where things aren’t going as well as you’d like and maximizing those days.”

Crew chief Todd Gordon also knows the importance of establishing a strong and consistent program on the intermediate tracks.  He points to last weekend’s race at Texas as a prime example of just how important those races are.

“We finished 15th at Texas and advanced (up to 19th in points),” said Gordon.  “The important thing is that we persevered through less than ideal conditions and we advanced.  We started off tight, knowing that the track would turn more toward the loose side when the sun went down and it cooled off.

“We did the best job we could with our adjustments, but the car had such incredible mood swings from tight to loose and back to tight again.  The most important thing was that we hung on and made a decent night out of a frustrating race.  With only two cautions during the entire race, it was a huge challenge.  AJ was able to keep logging those laps with an ill-handling car and keep on our pit schedule and we got all we could out of it there on Saturday night.

“That’s the common trait about all the top teams in our sport,” said Gordon.  “When you are having a bad night, you are still able to salvage a decent finish out of it.  That was definitely the case for our 22 team out there last weekend.”

So, what are the prospects for the upcoming weekend at Kansas from Gordon’s view?

“AJ said at the beginning of the year that he felt like this kind of track was not one of his strong points,” said Gordon.  “It’s been strange in that we’ve been able to run surprisingly well on those types of tracks this season and we’re hoping that trend continues this weekend at Kansas.

“Unlike at Texas, all of our practice comes in the daylight and the race is on Sunday afternoon, so it won’t be as much as a guessing game.  The winds we were fighting there probably were as bad as we’ll see all year long.  I am really looking forward to it.

“As for me personally, I love racing at Kansas,” Gordon offered.  “This will be my first race there in Cup, but we sure had a great weekend there last fall in the Nationwide Series.”  (Gordon served as Brad Keselowski’s crew chief in last October’s Kansas Lottery 300.  In that race, Keselowski started second and led 173 of 200 laps en route to the victory. It ranked as possibly the most dominating performance during the entire season.)

Allmendinger, Gordon and crew will be racing their new “PRS-823” AAA Dodge Charger this weekend at Kansas.  The “PRS-814” is the backup Dodge Charger for the “Double-Deuce” team.  It was in the transporter serving as the backup at Las Vegas, Fontana and last weekend at Texas, but has never seen any track time.