Diesel Coming to a Chevy Cruze Near You 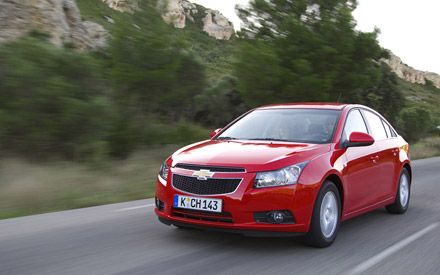 General Motors has confirmed that it will offer a diesel engine in the Chevrolet Cruze starting in 2013. Rumors of a diesel Cruze in the U.S. market have been circulating for months, but GM CEO Dan Akerson says that while details are still being confirmed, it is believed that the Cruze will get about 50 mpg on the highway.

The diesel versions have had a lot of success in Europe and Australia. One reason for the absence of diesel passenger cars in the U.S. has been the difference in emission regulations between the United States and Europe. The U.S. currently has the strictest passenger car diesel emission requirements in the world, so certifying an engine for a limited American market has been a costly proposition for automakers.

The diesel variant will expand the Cruze U.S. lineup that includes an Eco version rated as the most fuel-efficient gasoline-powered car on the market, at 42 mpg on the highway. Around town the Cruze diesel is likely to rate somewhere in the low- to mid-30-mpg range. It’s expected to be a 2.0-liter turbodiesel four-cylinder.

The diesel Cruze will go head-to-head against Volkswagen’s well established Jetta TDI, which gets an EPA estimated 30mpg city and 42 mpg highway.

Cruze sales have surged since its launch in September, when it replaced the Chevrolet Cobalt. Chevrolet sold 122,972 Cruze units during the first half of the year, nearly 60 percent more than the number of Cobalts sold during the same period in 2010.

GM says the Cruze has increased its share of the U.S. compact car market from 9.5 percent a year ago to 11.9 percent during the first five months of this year.

Will this lead to more diesel offerings on this side of the pond in the coming years?  Penske Automotive Group as well as Chevrolet of Fayetteville, Chevrolet of Turnersville, Landers Chevrolet and Penske Chevrolet are very interested in the development of diesel passenger vehicles in the U.S. As we continue to get more information about diesel cars filtrating the U.S. market and the launch of the Chevy Cruze we will keep you posted.

Vote in yesterdays Facebook Poll found at https://www.facebook.com/PenskeCars. Would you consider purchasing a diesel-powered vehicle?

How do you say “We’re jealous” in Italian?