Briscoe’s Proves He’s Not A Third Wheel In Indianapolis 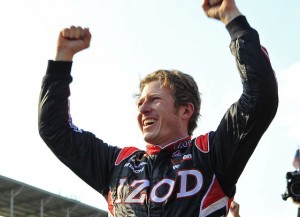 Ryan Briscoe’s pole-winning run for the 96th Indianapolis 500 looms as the perfect vehicle to alter the Australian’s image as “third-wheelman” at Team Penske. This is Team Penske’s 17th pole win!

Largely overshadowed by Helio Castroneves and Will Power during his four-plus-year tenure at Penske,Briscoe figures to spend much of the week leading up to Sunday’s green flag eloquently chatting-up “The Greatest Spectacle In Racing,” team-owner Roger Penske’s open-wheel legacy – and maybe even himself.

“It’s good knowing my name will go down in history at the Indianapolis 500,” said Briscoe, 30, first Aussie to qualify on-pole at Indianapolis Motor Speedway. “It’s something that will be here forever. This race is so important and so big. A pole win here is tremendous. It’s a great feeling.”

Briscoe posted a four-lap average of 226.484 mph in the early moments of Saturday’s Fast Nine Shootout, then withstood several challenges from competitors and his teammates over the 90-minute session to secure the 13th pole of his IZOD IndyCar Series career. Driver of the No. 2 IZOD Team Penske Dallara/Chevrolet, Briscoe touted the company line after notching the organization’s record 17th pole with 11 drivers at IMS.

Ryan Briscoe became the top man at Team Penske over the weekend.

Briscoe, who also qualified on-pole on the Streets of Long Beach last month. “Over 600 years of experience on the team – that’s a quote from Roger; I haven’t done that tally. But it adds up. All of these guys with all of this experience and Roger’s own experience – Helio’s experience, Rick Mears’ experience – all of these guys, all of our mechanics are so experienced. I think that helps us once we get here to do things methodically, not get ahead of ourselves, never get overconfident and just keep working hard. But it all starts with the preparation.”

Indeed, Briscoe’s advantage over No. 2 qualifier James Hinchcliffe of Andretti Autosport during their four-lap/10-mile runs around the 2.5-mile IMS oval computed to 9.168-inches. Power, meanwhile, will start fifth after posting a four-lap average of 225.422 mph in the No. 12 Verizon Team Penske Dallara/Chevrolet. He will be joined in Row 2 by Castroneves, a three-time Indy 500 champion who will start sixth after a four-lap run of 225.172 mph in the No. 3 Shell V-Power Pennzoil Ultra Team Penske Dallara/Chevy.

Team Penske now has qualified on-pole in 25 of the last 39 IndyCar races, including all five this season. Castroneves and Power have combined to win the season’s first four street/road-course races, including three in a row by point-leader Power.

Briscoe, meanwhile, has yet to podium this season and stands seventh in the points chase. His average starting position through four races was eighth; his average finishing position is 12th. Given those stats, Briscoe said he wouldn’t have been shocked if either Power or Castroneves had knocked him off P1 in the closing minutes of Saturday’s free-for-all.

“Wouldn’t have been the first time, would it?” Briscoe joked during his news conference. “So, hey, it’s just

part of the game, and you know, we work together and (help) each other. The teamwork is how we get to the front. We share everything among each other and I think that’s why this team is so consistently fast here. Everything is totally transparent at Team Penske, and it always has been.

“We push each other hard all the time and it’s great that we are often competing against each other all the time, whether it’s here or the road-courses or any track. We always seem to be going head-to‑head for the pole, and obviously this one means more than any of the others. It would have been nice to be sitting here with both my teammates on the front row with me. But we have got three cars in the front two rows and that’s a massive accomplishment.”

Castroneves’ three victories and four poles at IMS – and his flamboyant personality – mark him as Team Penske’s franchise player. While Power is no match for Castroneves as a marketing machine, the Australian’s road-racing prowess and back-to-back runnerup point finishes to four-time/reigning series champion Dario Franchitti of Target Chip Ganassi Racing have raised his profile among open-wheel’s cognoscente.

Briscoe, whose six IndyCar Series wins include two from the pole, probably is as recognized for his marriage to wife Nicole (Manske), a host for ESPN’s NASCAR coverage, as for his on-track resume. Asked about how he planned to deal with the impending media blitz, Briscoe said: “I’m just going to take it. We’ve got a few days off, so you know, the exposure is good. Certainly the focus is the race, and I’m sure I’ll have no problem getting my priorities in line.”

Asked again to expand upon his place in the Penske Racing legacy at IMS, Briscoe declined to embellish. “Yeah, I mean, it’s great. It’s good. Thank you,” Briscoe said. “I don’t know what else you want me to say; I’ve sort of talked about it.”

Power said Briscoe’s pole at IMS will prove to be “a massive deal” as the build-up continues to Sunday, beginning with Media Day on Thursday. “(Ryan), he loves this place,” Power said. “I think he had a bit of a rough start to the season, so it all comes around, doesn’t it? It all works out in the end. I think that’s going to be a big tick in the box for him. I mean, he’s been searching for that one for a while.”

With his pole, Briscoe now has logged three front-row starts in six Indy 500s. But his only top-five is the fifth-place finish he posted as a rookie with Luczo Dragon Racing in 2007. Contact with Townsend Bell on Lap 157 last May relegated Briscoe to a 27th-place finish – one spot lower than he qualified.

Castroneves said this pole will shove that memory into the background. “For him, it’s a big deal,” Castroneves said. “Certainly, he’s going to have a long week ahead of him, a lot of publicity, which is good, and good for him, good for our sponsors. Not only that, I don’t think he’s going to be sleeping very well. He’s going to be very anxious to go to the race, at least that’s what happens. You kind of know that you have a good car and good speed and you have to go for it, but you have to pace yourself.