Allmendinger Hoping To Continue To Show Strength at Texas 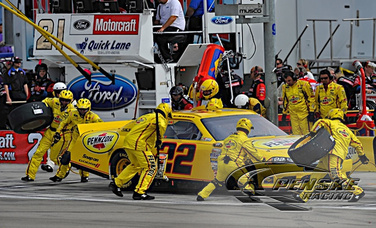 FORT WORTH, Texas (April 10, 2012) – Shell-Pennzoil Dodge driver AJ Allmendinger used the rare off weekend along the NASCAR Sprint Cup tour very wisely. He used the time off to get over the illness that hit him Martinsville race weekend and get rested up for the return to action this weekend. Allmendinger scored his best career result at Martinsville, a second-place finish, and is hoping to carry that level of strength into Saturday’s Samsung Mobile 500 at Texas Motor Speedway.
“There at Martinsville on Friday and Saturday, we weren’t that good,” Dinger offered. “But I think working with Todd Gordon, we found a direction that we can go with to help us in the future. That’s what we’ve been trying to do over these first six weeks — just trying to learn each other. ”

So, was what Allmendinger, Gordon and crew found “direction-wise” during the Martinsville weekend something they can take to Texas and on down the road?

“We certainly hope so,” Dinger said. “We won’t know till we get there, but we hope so. You know at Vegas we were really fast and I feel like at Texas we should be pretty good anyway. I hope that what we learned at Martinsville gives us what we need.

“That’s something that Todd and I have talked about in trying to learn each other,” he continued. “We’ve been trying to get going in the best direction with the front end. Honestly, the Penske cars are a little bit different from what I’d been used to. We kind of went back in the direction that I had been running the last few years and I think that really helped.

“Our car wasn’t perfect at Martinsville. It seemed like the only cars that were nearly perfect there were the Hendrick cars. I feel like we at least have something now to go to Texas and try. The good thing is that coming up we have the Dover tire test we’re going to do (on April 17). We have a Pocono test on the schedule (June 6-7).

“Those are days at the race tracks we’re going to be racing on. That will give us opportunities to try some stuff and hopefully continue to improve.”

“It was really hard to tell at a track like Martinsville,” Allmendinger said of feeling any difference between the old engine and the new one introduced in the most-recent race. “It’s all about trying to get the pieces lighter and the weight lower on the race car. It’s something the Penske guys have been working hard on for really the last year trying to get the thing going. It’s more about the center of gravity. Obviously, you want more horsepower and more torque. Martinsville is pretty hard to see where you stand on that. Our engine ran great there all weekend and hopefully it’s a sign of good things to come. We’ll know more about it after the race at Texas.”

Crew chief Gordon is eager to get to Texas and is optimistic that his Penske Racing “Double-Deuce” team is on a positive roll.

“The communication between AJ, the engineers and me remains on a steady course and gets stronger every time we’re on the race track,” said Gordon, who will be serving as Allmendinger’s team leader for only the seventh race on Saturday night at Texas. “It has been a continuing learning procedure for us all and I am very pleased with the progress we have made in such a short period of working together as a team.

“At Martinsville, we took what we were hearing from AJ as for his description of how he felt his car was handling and headed in the direction we thought was appropriate. Essentially what we did was give him a more stable platform to work with. Looking at his background and listening to his comments, we went with a more rigid setup for the front end and it gave him the feel he wanted and the stability he needed.

“That was the direction we headed in at Martinsville and it was a solid day from the beginning all the way till the end of the race,” said Gordon. “We’re hoping for a lot more solid races like that and are getting a really good grasp on what AJ needs to take our Shell-Pennzoil Dodge Charger to the front.”

In eight career starts at Texas, Allmendinger is still looking for his first win and top-five finish. He has scored two top-10s, including the 10th in the most-recent visit to TMS for last November’s AAA 500. Dinger has an average start of 18.8 and average finish of 20.6 at Texas. He has completed 92.7 percent of possible laps (2,477 of 2,672) and is still looking to lead his first lap at TMS.

Allmendinger, Gordon and crew will be racing their new “PRS-821” Shell-Pennzoil Dodge Charger this weekend at Texas. The “PRS-814” is the backup Dodge Charger for the “Double-Deuce” team. It was in the transporter serving as the backup at Las Vegas and at Fontana, but has never seen any track time.

Thursday’s practice from 4:30 p.m. till 6:30 p.m. kicks off this weekend’s action at Texas Motor Speedway. Friday’s final practice is set from 2:00 p.m. till 3:30 p.m. Qualifying for the Coors Light Pole Award and to establish the starting grid for Saturday night’s battle is set for Friday at 5:40 p.m. local (live on SPEED). Saturday’s Samsung Mobile 500 (334 laps, 501 miles) has a scheduled 6:30 p.m. local starting time on the 1.5-mile Dallas/Fort Worth Area speed plant. FOX-TV and PRN Radio will provide live coverage of all the action.