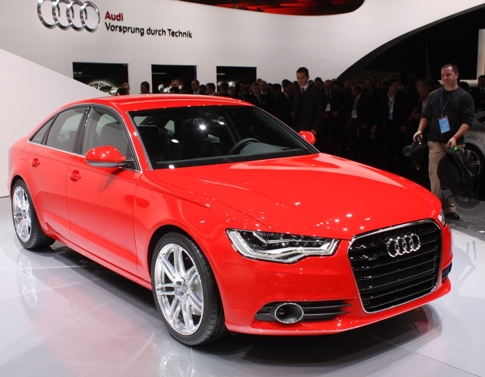 The 2012 Audi A6 is set to hit U.S. soil in July, and is officially tagged with a starting price of $41,700. You may notice a marginal price cut than previous years, which was done with the intention of strategically keeping up with base models of BMW and Mercedes-Benz. However, the base 2012 Audi A6 forgoes the V6 unit of its competitors.

Despite this new 2012 Audi A6 not looking or even driving much differently than its predecessor, the 2012 Audi A6 sure is a lot more alluring. Like many newer car models, technology is a big differentiator from an “older” model vehicle, compared to newer models. The 2012 Audi A6 is no different, due in part to available features like a dedicated internet connection, touchpad interface and stop-and-go cruise control.

In addition to a supercharged V6, the 2012 Audi A6 will also offer a more fuel-efficient four-cylinder engine, which will deliver 33 highway miles per gallon. The A6 is also equipped with a 3.0 TFSI that is capable of churning out 310 HP. In addition, there is also a Premium Plus package, for an additional $4,220 that offers  a large infotainment screen, upgraded 18-inch alloy wheels, Audi connect mobile data and HD radio. Furthermore, the 3.0 TFSI also comes with the Prestige package at a price of $6,880 and offers unique 18-inch V-spoke wheels, four-zone climate control, keyless entry, adaptive headlights as well as Led ambient lighting.

Audi’s chief designer, Wolfgang Egger, talks about a “line of lineage” from the first Audi 100 of 1968 to the new 2012 A6 of today. “You should never interrupt history,” says Egger. “If you want to sharpen the emotion of the brand you look to the R8, A7 or E-Tron, not the A6.” While the A8 asserts its plutocratic status and the A4 screams “upwardly mobile,” the A6 has always been the choice of those who want the trappings of success but don’t need to tell the world. It’s Audi’s most sensible car and it’s no surprise to discover that the latest incarnation is a subtle evolution of the old. (insideline.com)

Coming soon (July 2011) to an Audi dealership near you…